In the rice-rich Mekong region, will husk briquettes take hold? 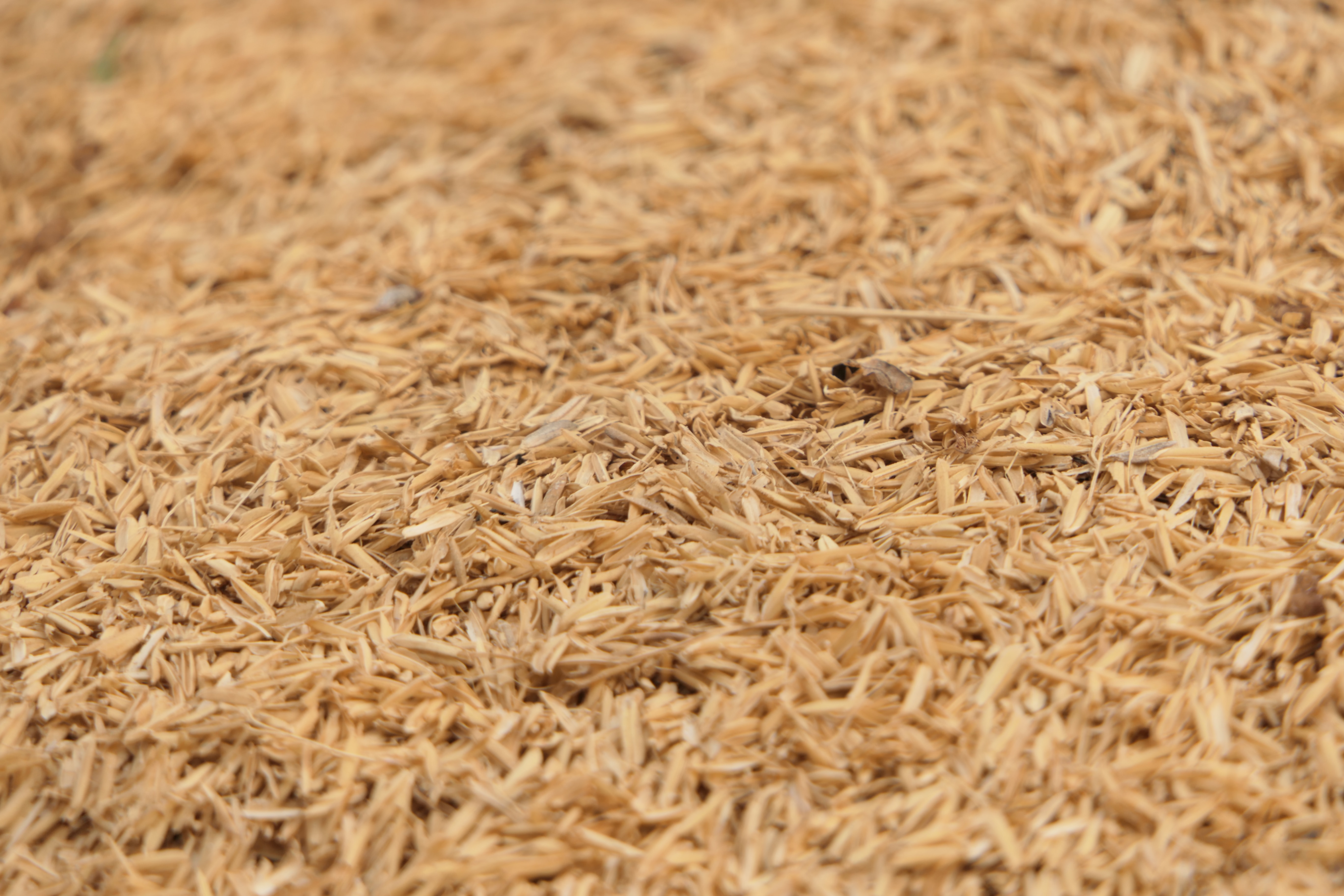 Sanu Kaji Shrestha was wandering along a Cypriot coastline 10 years ago, enjoying some downtime from a workshop he was leading on green energy technology, when he decided to collect some seaweed to experiment with.

Shrestha was searching for ways to expand the types of raw materials that could be turned into combustible briquettes — an increasingly common way for natural waste or by-products to be used as an alternative to cutting down trees and mangroves for fuelwood.

“I tried, and finally I made briquettes from the seaweed,” Shrestha told Mongabay. “It [showed] me that raw materials for briquettes are available everywhere.”

He’s not wrong, either, having successfully made about 100 different types of briquettes from biomass, the use of organic material for energy either through burning or conversion into biogas.

Shrestha has used nuts, fruit — both edible and inedible — rice husks, mushroom waste, leaves, grass and waste paper in his home country of Nepal. The process involves mixing the raw waste together as a kind of mulch, which is then compacted into briquette shapes using a pressing machine. The bricks are then hung out to dry.

Through the nonprofit Foundation for Sustainable Technologies (FoST), Shrestha led workshops in Thailand in 2017 and 2018, with hopes to continue encouraging people in the Mekong region to use the waste products they find at home, on farms or in nature as alternative forms of fuel for cooking, brick-making or other enterprises. He has found, however, that without incentives, it can be difficult for such habits to take hold.

In 2015, the U.S. Agency for International Development put together a roundtable of clean-energy experts from the Lower Mekong region to assess the opportunities and barriers that respectively encourage and prevent people from switching to renewable energy.

They found a lack of incentives, as well as “fragmented policy, coordination across ministries, lack of an independent regulatory body and the lack of integrated and transparent planning to be the most significant barriers.”

From field waste to fuel source in Myanmar

A study released in May 2019 found that energy potential from “major” biomass sources in Myanmar, including fuelwood, reached just over 17 million tons of oil equivalent in 2017. The authors also found that the biomass potential for the country could be as much as 50 percent more than projected energy outputs between 2015 and this year.

While the potential for growth exists in Myanmar, the report found that the country needs to “develop more innovative solutions to the constraints and opportunities of biomass energy of the country,” as well as engaging the public and private sectors, investing more in research, and involving local leaders more.

Co-author Maw Maw Tun, a researcher from the Department of Mechanical Engineering at Myanmar’s Government Technical Institute, told Mongabay that fuelwood biomass is still the popular choice for most people.

“People will still need to be incentivized toward non-forest related biomass, because biomass market for non-forest related biomass is only at an emerging stage in Myanmar,” he said. “And biomass project developers could not afford their own investment without subsidies and incentives from the government due to costly and less profitable kind of investments compared to others.”

Anecdotal evidence suggests that briquetting ventures, even on a smaller scale, can reap positive outcomes not only for people, but also in offsetting the depletion of forests or mangroves. In Myanmar, U Zayar Myo saw an opportunity to use rice husks as an alternative to mangrove-derived charcoal. In May 2018, he was recognized with an award for his entrepreneurship, and today he runs a successful husk-briquetting factory that sells to other businesses that once relied on burning wood from mangrove trees.

Funding was a key component in farmer and rice mill-owner U Soe Paing getting his own husk-briquette business off the ground in May, with half of the costs of setting up offset by the Responsible Business Fund, part of the Danish government’s financial aid package to Myanmar.

His workshop, in a village in Magway city, now produces briquettes from the husks he once considered a waste material and dumped in empty fields.

Soe Paing said fellow villagers have usually relied on burning charcoal or using electricity, if they can afford it, but he hopes to become a serious competitor with his briquettes. A 1.6-kilogram (3.6-pound) briquette costs him about 5 U.S. cents to produce, and he can make about 320 kilograms (700 pounds) of them in one hour. For now, his markup is minimal, selling to local teashops and businesses for just 6 cents. But given that a day’s worth of charcoal costs about 19 cents, he’s already undercutting that market.

“By using biofuel rice-husk briquette instead of wood, you can conserve trees and forest,” he told Mongabay.

One of his regular customers, teashop owner Ko Tin Min Htut, said he believes the briquettes are likely to gain in popularity in the area, and that he can foresee people switching over from charcoal.

“There is big different in terms of cost. When I used charcoal … there was around 10 sacks I have to buy every month,” he said, adding that it cost him around $20.

Tin Min Htut also spent about $33 a month for fuelwood, which has now dropped to about $6.60 per month for the briquettes.

“For the village, I can say that it can reduce costs,” he told Mongabay. “It’s useful. It’s highly flammable, you can only put five small pieces of rice husk briquette [to] boil a tea pot for very long time. It has good flame, you can boil the pot with this stove fire. You can only add one small piece to keep it burning longer.”

According to the RBF site, grants have been given to, or are under consideration for, 39 rice-husk fuel ventures. Thirteen projects involve making briquettes.

The use of biomass has started to gain traction on a larger scale in Myanmar, with several new rice-husk power plants opening up over the past few years. In some cases, the home appliances of entire villages — lights, fans and television sets — are powered using rice husk as the fuel source,

The growing appetite for fuel and the forest

The Mekong region’s hunger for coal and other fossil fuels is growing, and millions still burn wood to make charcoal for cooking.

In 2013, it emerged that a third of the forest cover across all five countries in the region had been lost. With continued deforestation, the region is expected to lose another third by 2030, according to a 2018 WWF report.

According to a 2015 Global Forest Watch report, the rising rate of tree cover loss in the Mekong region was driven largely by logging, the construction of dams and the clearance of forest for the cultivation of commercial crops.

In Cambodia alone, data released by NASA in 2017 showed that only 3 percent of the country still had primary forest coverage, and that 1.59 million hectares (3.9 million acres) of tree cover were lost between 2001 and 2014. Most of the timber that is illegally felled in Cambodia ends up passing through Vietnam, which itself lost 300,000 hectares (741,000 acres) of forest cover between 2010 and 2015.

With so many crops already grown in the region, and assuming that no forest is cleared for further biomass or biofuel production, the rice-husk briquette industry could have a positive impact on the environment.

The Mekong countries of Thailand, Laos, Cambodia, Myanmar and Vietnam collectively produced approximately 98 million tons of rice last year, according to FAO figures, meaning the potential for rice husks and straw for use as biomass is sizeable; not to mention by-products from other crops such as maize, corn and cassava.

An alternative fuel appropriate across the Mekong

A 2015 report by the Asian Development Bank (ADB) looked at renewable energy potential in these five countries, finding that the biomass or biofuel potential was “considerable, reflecting the importance of the agriculture sector for all countries in the region.”

In Cambodia, for instance, using rice wastage could save people from high electricity prices, the ADB said.

“The predominance of rice production in Cambodia contributes to the high availability of rice residues, such as rice husk and rice straw,” the report said. “These residues could be an option for a variety of biomass energy systems.”

In addition, because of the concentration of people “from the Thai border in the northwest to the Vietnamese border in the southeast,” and with that the growth of rice and other crops, “large-scale mills for processing these crops offer the potential for power generation from biomass residues.”

In Laos, the ADB found that “wood and charcoal account for almost 70 percent of primary energy, thus contributing to extensive deforestation.” But given that about 90 percent of agricultural land is used to grow rice, “the potential for biomass energy from rice, maize, sugarcane, and other agricultural residues is high.”

According to Shabbir H. Gheewala, a professor and head of the Life Cycle Sustainability Assessment Lab at the Joint Graduate School of Energy and Environment in King Mongkut’s University of Technology, Thailand has had an established rice-husk fuel industry for some time, thanks to government incentives such as the feed-in tariff, which guarantees payments for the production of renewable energy.

“Thailand has the Very Small Power Producer (VSPP) and Small Power Producer (SPP) schemes which allow power plants using biomass as the fuel source to sell electricity to the grid with a feed-in-tariff markup … to make it more attractive,” Gheewala told Mongabay. “As rice husk is a product of rice mills, I think the market is already quite well-established here.”Shrestha says he hopes to continue holding workshops across the Mekong region to promote the benefits of homemade briquettes, particularly because, on an anecdotal level, he’s seen that it can be hard for the habit to take hold.

He’s currently looking to take his workshop to Myanmar.

“[T]hose who learned the techniques of briquette making from degradable items have long time stopped the household business, because they find gas locally for cooking, even if it is costly,” he said.