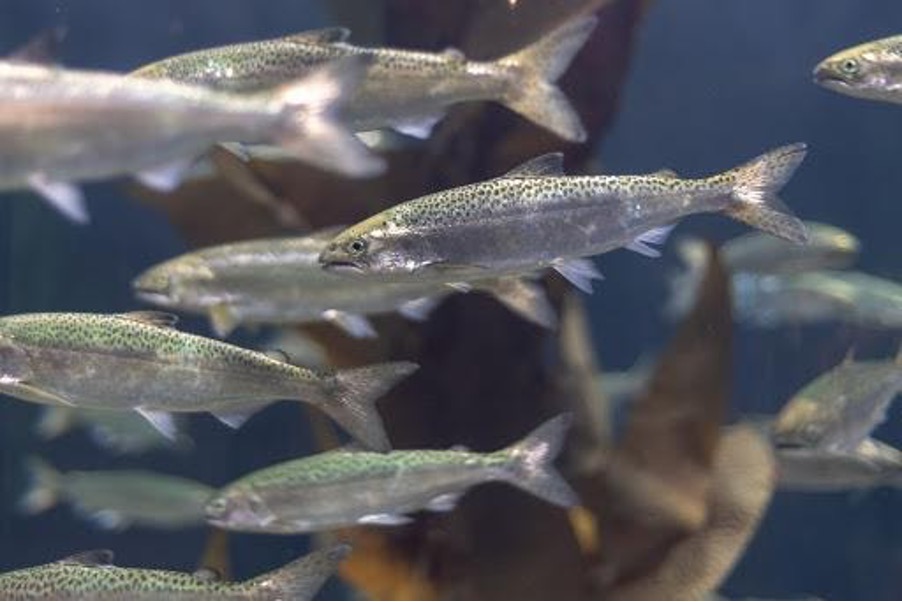 This is an original article written by Sayali Chaudhari

As a tourist driving alongside the scenic meandering fjords in Norway, or passing by the lochs of Scotland, you may easily fail to notice the presence of fish farms. You may spot some metal poles sticking out of the water, and perhaps some netting covering floating wooden walkways. Beneath the surface, however, are thousands of salmon swimming in circles against a strong water current. Farmed salmon has long been touted to be healthy and sustainable, but the truth is – the world of farmed salmon is a complex one, and not all salmon are created equal.

What is salmon farming?

Just like how we farm animals on land, salmon farming refers to the farming of salmon in oceans. Salmon are born and nurtured in freshwater hatcheries for one year and then sent to saltwater farm sites to continue growing. Salmon can be found from both wild and farmed sources. However, the most commercially available is Atlantic salmon, which is the primary species farmed. The majority of Atlantic farmed salmon originates from Norway, Scotland, Chile, and Canada. Today, approximately 60% of salmon produced worldwide are farmed.

Salmon farms are a substantial source of pollution to natural marine ecosystems. They are often close to such ecosystems as they rely on natural conditions such as stable temperatures, high oxygen levels, and minimal influence from terrestrial runoff. Marine ecosystems deteriorate as a result of pollutants from salmon aquaculture such as uneaten feed and faeces, which are directly discharged into the marine environment. The build-up of these organic matters, also known as eutrophication, drives the formation of large algal blooms. This not only increases the mortality of salmon but also deprives other species present in the ecosystem of oxygen. In 2019, 8 million salmon in Norway were killed in an algal bloom in just a few days. This is indeed a major problem that needs to be addressed. You would be disappointed to learn, however, that local pollution is only one of the many pressing issues that plague the salmon farming industry. 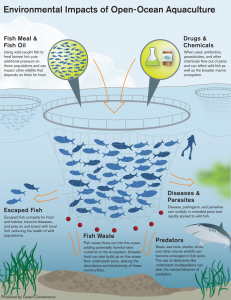 It is not uncommon for farmed salmon to escape from sea cages and into the natural environment. When this happens, it can have negative implications for wild species of salmon. Escaped farmed salmon breed with the wild population, reducing their ability to survive in the wild. Studies indicate that these effects are likely to be passed on to future generations. It is important to note that large-scale escapes from salmon farms are still regularly reported, with Chile and Norway accounting for 60% of the largest escapes. This large number can be attributed to the use of faulty equipment, such as nets that are damaged by boats and propellers. Unexpected weather events, such as heavy storms can also cause equipment breakdown, allowing thousands of farmed salmon to break free and escape into the wild.

The spread of diseases to the wild population is also a major negative impact caused by escapees. Farmed salmon living in such close proximity provide optimal conditions for the transmission of sea lice between individuals, often resulting in a large percentage of farmed salmon populations carrying the parasite. One study has found that lice from salmon farms kill 50,000 wild salmon in Norway per year. Fish farmers have attempted to solve this dire problem by chemically killing off the lice using anti-crustacean poison. While it is effective against lice, it can also inadvertently kill shrimp or lobster, resulting in a massive outcry of protest from lobstermen. Therefore, more innovation is definitely needed in this area to reduce the risk of sea lice and their transmission to wild salmon species. 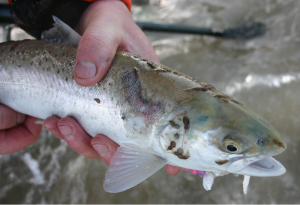 Most of us do not spend much time thinking about what the farmed fish we are eating might itself be eating. Farmed salmon feed on fishmeal and fish oil (FMFO) which are produced by using pelagic fish: highly nutritious forage fish. As such, salmon farming also contributes to the biodiversity loss of pelagic fish stocks. Close to one-fifth of the world’s annual marine wild-fish catch is taken out of the ocean to be used for the production of FMFO, and in 2016, 69% of fishmeal and 75% of fish oil were used for seafood farming. The vast majority of this was used in salmon aquaculture. Pelagic fish play a vital role in the ecosystem as they serve as the primary food source for many marine mammals, seabirds, and larger fish. Thus, with a large drop in pelagic fish stocks, their predators are also negatively impacted. 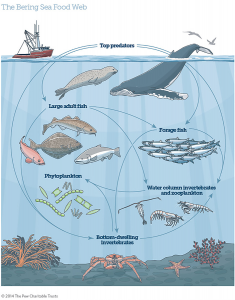 The increasing global dependence on FMFO for consumption by farmed salmon means that forage fish supply is often diverted away from direct human consumption. In low and middle-income countries, this phenomenon can have an adverse effect on national food security. Norway is the main importer of FMFO for West Africa, while Canada, Chile, and Scotland obtain most of their marine ingredients from Peru. Research undertaken by the Changing Markets Foundation has shown that the decline of FMFO stocks has led to Peruvians eating more frozen imported fish. This is in direct contrast to Peru’s national food strategy which encourages direct human consumption of FMFO to mitigate the longstanding issue of undernutrition in communities.

Then, there is also the need to consider the impact on the livelihoods of the local fishing communities. Widely recognised as the fastest-growing food production in the world, salmon aquaculture has led to an exponential increase in demand for FMFO. This has lead to key marine areas being overfished, leaving behind a limited supply of fish available for local fishermen. This means that the livelihoods of those who depend on fishing are further threatened, leading to increased poverty rates, and forced migration. Furthermore, roles such as building boats and preparing meals using the fish captured often employ women who usually have limited opportunities for gainful employment. Tragically, their contribution is often undervalued or unmentioned. 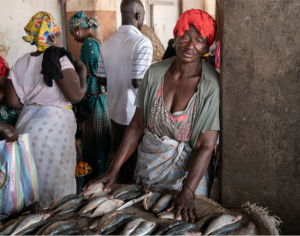 What should be done to mitigate this issue?

As outlined above, there are a host of negative environmental and socio-economic impacts associated with salmon farming. There is an urgent need for different stakeholders involved to step up and enact change.

As the urgency for regulation in this industry becomes increasingly apparent, governments should lead the way by only issuing licenses to companies that adhere to strict social and environmental standards. This would in turn lead to healthy competition. Policies to support the development of alternative technology, such as in the space of sustainable feed ingredients and better farming methods would also be really helpful in the long term. Farmers can work with the aquafeed industry to eliminate wild-caught fish from feed formulations and instead opt for a feed formulation with the least environmental cost. While the most commonly used alternatives are soy, wheat, and corn, recent developments have revealed some promising new contenders: insects and bacteria. 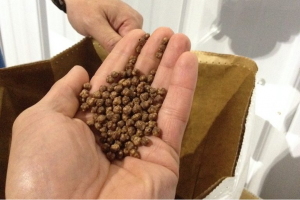 Aquafeed with bacteria as the main ingredient at Massachusetts-based company KnipBio.  Source: Mongabay

We, as consumers, have a significant role to play too. A big part of our impact comes from our ability to speak with our wallets. We can opt to buy wild salmon or sustainably farmed salmon which usually comes at a higher price. We can also seek out alternatives to carnivorous fish such as molluscs that provide dietary benefits at a lower environmental and social cost. However, it is important to remember that many are not privileged enough to be in a position where they can choose the highly-priced sustainable option. Thus, the bulk of the responsibility falls on the salmon farming industry to improve its performance by pursuing best practices, and the governments that give it operational licenses.