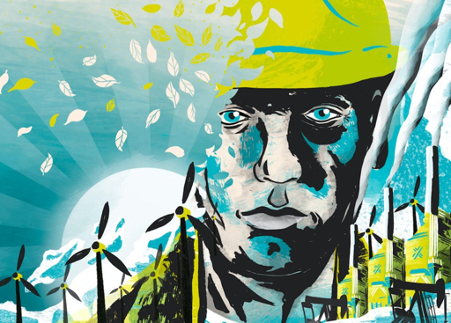 In February this year, Singapore raised its petrol duties for the first time in six years by 23 percent in order to encourage more Singaporeans to reduce their vehicle usage and promote the early adoption of electric vehicles.

It first seemed like a welcome change. However, three days later, climate activist group SG Climate Rally launched a petition against the petrol hike and calling for a ‘just transition’.

So, what exactly is a ‘just transition’?

In the 1990s, the term ‘just transition’ was first used by North American unions to describe a support system to protect workers affected by environmental protection policies. Eventually, it grew into the idea of an economic transition that is both environmentally and socially sustainable.

What does it mean to be environmentally and socially sustainable? In 2015, the International Labor Organisation published a set of guidelines for a just transition towards environmentally and socially sustainable economies. In their report, they emphasised that “a just transition for all… needs to be well managed and contribute to the goals of decent work for all, social inclusion and the eradication of poverty”.

For instance, in Germany, the transition to renewable energy started in 2010 and is called Energiewende. Beyond addressing the environmental impacts of lowering carbon emissions from energy, it also extends to the supply and affordability of energy and other consequences of the transition. Resources are dedicated to the upskilling of displaced workers for new industries and promoting workers’ protections to ensure that no one is left behind by the transition away from coal. This support and funding for impacted communities is key to a just transition. In fact, 92% of Germans support Energiewende – a stunning figure that is testament to its positive impact on workers. Examples of just transitions are not limited to the Global North. Chile updated its Nationally Determined Contributions (NDCs) in 2020 to include a ‘social pillar’ that links its climate and sustainable development policies. (NDCs are plans set by each country under the Paris Agreement to reduce national emissions and adapt to the impacts of climate change.) These new NDCs include criteria stipulating that Chile’s climate commitments must “consider the fair allocation of costs and benefits, with special attention to gender as well as vulnerable sectors and communities”. It also provides a strategy to set up committees to support communities affected by the closure of coal-fired power plants.

However, these policies are not without their flaws. Germany has been criticised for its lack of transparency in distributing support and its lack of protections for workers in new low-carbon industries, who have seen job losses of up to 40,000 at the end of 2019. Chile saw mass protests in 2019 after subway fares were increased due to the decision to power the capital’s subway system with solar and wind energy. With Chilean society already facing extreme inequality, the protests showed the world the consequences of pursuing environmental policies without factoring in social concerns.

Video from The Guardian

Despite these limitations, they are still ahead of most countries. As of April 2021, the International Trade Union Confederation found that only 79 out of 136 governments due to submit enhanced NDCs have done so, and only 10 of those include plans for a just transition.

The need to plan for a Just Transition

While it may seem as if the transition to a more sustainable economy is antithetical to job growth, that is untrue. Anabella Rosemberg, senior climate and environment adviser for the International Trade Union Confederation wrote in 2010: “Job losses are not an automatic consequence of climate policies, but the consequence of a lack of investment, social policies and anticipation.”

As the world slowly recovers from Covid-19, the need for a just transition is gaining greater traction as countries pivot towards more sustainable industries. Countries are starting to understand the need to build back better and greener post-pandemic – but we must question ourselves: Is there sufficient planning going into ensuring that this recovery is just?

Singapore’s government has yet to respond to the petition by SG Climate Rally regarding its petrol duty hike earlier in February 2021. However, it has provided some relief for those affected in the form of rebates, with more given to drivers of taxis, private-hire cars, motorcycles, and commercial vehicles. Even then, those affected have said that it is “too abrupt” and still “unreasonable”. 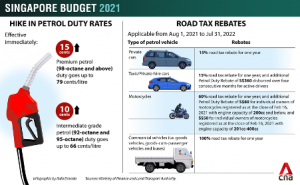 Nonetheless, Singapore is beginning to witness ballooning conversations around the need for a just transition. While the term has not been formally utilised by the government in its environmental policies, it has spoken of the imperative  to protect workers affected by the transition. Speaking in Parliament at the Committee of Supply 2021, then-Minister for Trade and Industry Chan Chun Sing spoke of the need for the “transformation of [Singapore’s] industries and the rise of green innovation [in germinating] new jobs”, and for Singaporeans to upskill and reskill to take advantage of these opportunities.

Minister for Sustainability and the Environment Grace Fu has also said that the Ministry expects to create 4,000 “new and upgraded jobs” in 2021, and 55,000 over the next decade. The Ministry will also explore “private-public collaborations… [so that] economic prosperity and environmental sustainability can go hand-in-hand”.

In her speech to the UN Climate Action Summit in 2019, ITUC General Secretary Sharan Burrow said: “If we imagine the future where no one is left behind, where we act on the call of our children who have taken to the streets in fear and frustration, where people and their communities are well served by inclusive economies, we can build it together.”

The pandemic has highlighted both the urgent need for climate action and the stark inequalities that plague our societies. The road to a green recovery cannot be taken by governments alone. Instead, it must be taken in partnership with all its people to build an inclusive society that lifts its poor out of poverty and provides decent work for all.