Nudging Culture and Conversations: The Role of the Media in the Climate Fight

This is an original article written by Gawain Pek.

The climate crisis and the imperative need to adopt transformative, sustainable practices fast is no new news. Yet, progress has been slow. In 2020, 21 out of the 169 SDG targets have since matured, out of which were only three that are on track to being met. Needless to say, current efforts made toward the rest of the targets are insufficient to help fulfil these targets in time. As much as climate change is a  widely accepted fact, there is still a great deal of pushback against it. Climate change denial still persists, and practices such as greenwashing by corporations taint the sincere efforts to achieve systemic transformation.

As the window of opportunity for action against climate change continues to close, there is a need to work against these counterproductive behaviours. Here is where the media comes in. For as long as modern civilisation as we know it existed, the media – both new and old – have been seen as the guardians of truth. Now, as the world hurls closer toward greater climate uncertainty, the media should see themselves as key allies to the sustainability cause.

Much of today’s unsustainable behaviours are the result of norms that were perpetuated by institutions and cultures. One good example is consumerism. In today’s world, we often do not think twice about buying new things. When something gets old or breaks, we toss it out and replace it. This notion is unchallenged and alternatives to this are hard to imagine. This is exacerbated when newer, better, and trendier products are constantly being advertised everywhere we look.

Erik Assadourian, researcher and sustainability advocate at Worldwatch Institute, writes about this. He argued, back in 2010, that the culture we live in and experience feels natural to us because of reinforcing norms, symbols, values and traditions. For this to change, it would take the courageous effort of cultural pioneers – “those who can step outside of their cultural realities enough to critically examine them” – to reshape what he called culture-shaping institutions. Of the number of institutions he named, the media was one of them.

In this, two messages can be distilled. First, the media plays a part in the perpetuation of unsustainable practices. Second, the media can be a cultural pioneer and promote sustainability. In realising this, the media industry should assess their values, and subsequently, play a part in naturalising sustainable behaviours. For example, instead of promoting the latest fashion product, the media should make thrift shopping the next “in-thing” or the norm. This can be done through the content the media produces, talks about or provides a platform to advertise. Instead of connoting “second-hand” as something of low value, media outlets can label thrift-shopping as vintage, or pre-loved, as this article does. With its reach, the media can be an effective catalyst for shaping a sustainable world. As Cass Sunstein notes, shifting norms can be powerful. It can unleash behaviours that people otherwise only practice in private, or it can allow people to imagine and subscribe to new values, ideas, or ways of living. Either way, it has the potential to create positive feedback loops. The media, as an institutional cultural pioneer, has the ability to unleash this power. Of course, they can also do the opposite and perpetuate norms that work against sustainability. 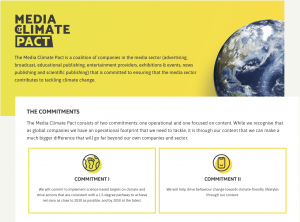 Fortunately, some media outlets have already begun to take on the responsibility. In the United Kingdom, the Responsible Medium Forum brings together UK media outlets to generate industry-based collective action for various social issues. One of these is the Climate Pack, in which signatories self-commit to implementing climate targets. The Pact also commits signatories to help drive behaviour change toward climate friendly lifestyles through the content they produce. Media channels such as Channel 4, iTV and Sky UK are already on-board this initiative.

Apart from shaping cultures, the media may also push back against the naysayers, serving as communicator of information. Climate science is complicated;  graphs, figures, numbers and standard errors are concepts not everyone is in tuned with. They are convoluted, and can put a barrier between the evidence and the people we need to convince. George Marshall notes this in his book “Don’t Even Think About It: Why Our Brains Are Wired to Ignore Climate Change”. Furthermore, in order for climate action to be successful, we must recruit as many agents of change as possible. To do so, we must not assume that the evidence of climate change is accessible to everyone. 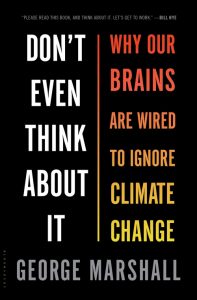 George Marshall: Don’t Even Think About It Cover

This is where the media can augment climate action efforts. From radio to television and social media platforms, the media has an audience that spans generations. With this comes the power to speak directly to a large range of people. Coupled with increasing resources that help to simplify the complicated science of climate change, the media can serve as a platform to disseminate information and help persuade people of climate realities. More importantly, it can also give more air time to news related to climate action. As an example, it was found that MSNBC only spent five minutes on then-US presidential aspirant Beta O’Rourke’s $5 trillion climate plan.

Media outlets recognise this power to persuade. The Guardian, together with the Columbia Journalism Review, launched in 2019 “Covering Climate Change: A New Playbook for a 1.5-Degree World”. The goal of the project aimed to increase the coverage of climate issues by US media outlets.

More importantly, the media’s attention on climate change can be used as a positive force to pressure corporations and governments to take action. A study in Spain found that with increased media attention on climate issues, government offices in left-leaning provinces were more transparent in matters such as sustainability reporting. In right-leaning ones, the offices avoided declaring contentious outcomes to avoid scrutiny. Regardless, this speaks to the power of the media. By paying attention to and illuminating climate issues, it makes it harder for governments and corporations to ignore or dismiss them. 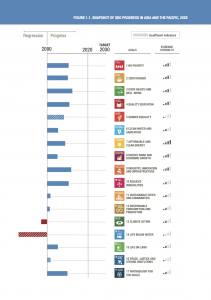 Earlier this year, the UN released its Sustainable Development Goals progress report for the Asia-Pacific region. The message is clear – the Asia Pacific region is not on track to meet any of its 17 goals. Time is ticking. The media is primed to mitigate this from the angle of both awareness and action. With its vast reach, the media can help proliferate the urgency of climate action, making it hard to ignore by governments or corporations. More importantly, the media’s influence as a cultural pioneer can help reshape societal values, thereby normalising sustainable behaviours. All these help push society toward a more sustainable future, be it by convincing powerful institutions to take action or motivating lifestyle changes. In these pressing times, the climate needs all the help it can get, and the media can be its greatest ally.