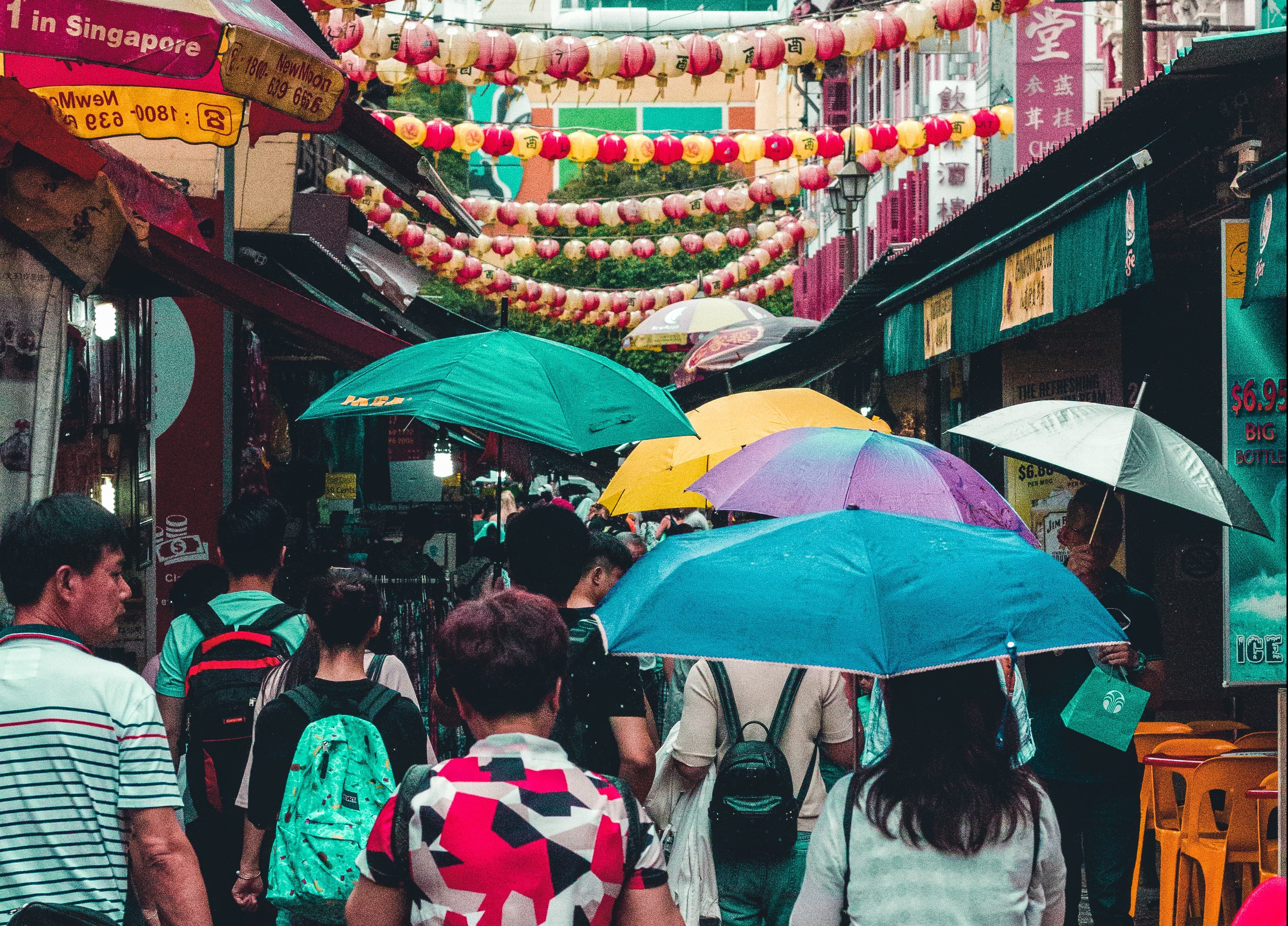 Photo by Lily Banse on Unsplash

This is an original article by Chelsea Li and edited by Racia Yoong from Global Initiatives.

Didn’t manage to get much time in the sun this past summer? Here’s why.

While the rest of the world is getting warmer, Singapore has just experienced the wettest and coldest weather this June in the last 20 years.

Subject matter experts from NEA’s Meteorological Service Singapore, Earth Observatory of Singapore, and university institutions caution that this record-setting weather can and is most likely linked to man-made climate change. That said, it is important to distinguish these events not just as a one-off cold spell, but the product of a larger issue at hand.

Apart from the cold, rainier weather, Singapore is also becoming more unbearably hot. 2019 marked the joint hottest year on record, with an annual mean temperature of 28.4 deg C. The hottest day in 2019 recorded a whopping 36.4 deg C and the number of days where the maximum temperatures exceed 34 deg C have been becoming more frequent.

When we think of the effects of climate change, many of us may first think of extreme events such as droughts, hurricanes and glacier melting. While these impacts do occur in other parts of the world, the lack of such drastic impacts (due to our fortunate geographical location) may mislead one into thinking that climate change does not affect Singapore as greatly as the rest of the world.

However, the combination of rising temperatures and abnormal weather events are key examples of the day-to-day impacts of climate change on our society, showing that Singapore is definitely not immune to climate change.

In fact, Singapore is much more vulnerable to the impacts of climate change, which can not only lead to devastating effects on our resources (e.g. water, food and biodiversity), but can also be hazardous to our health. 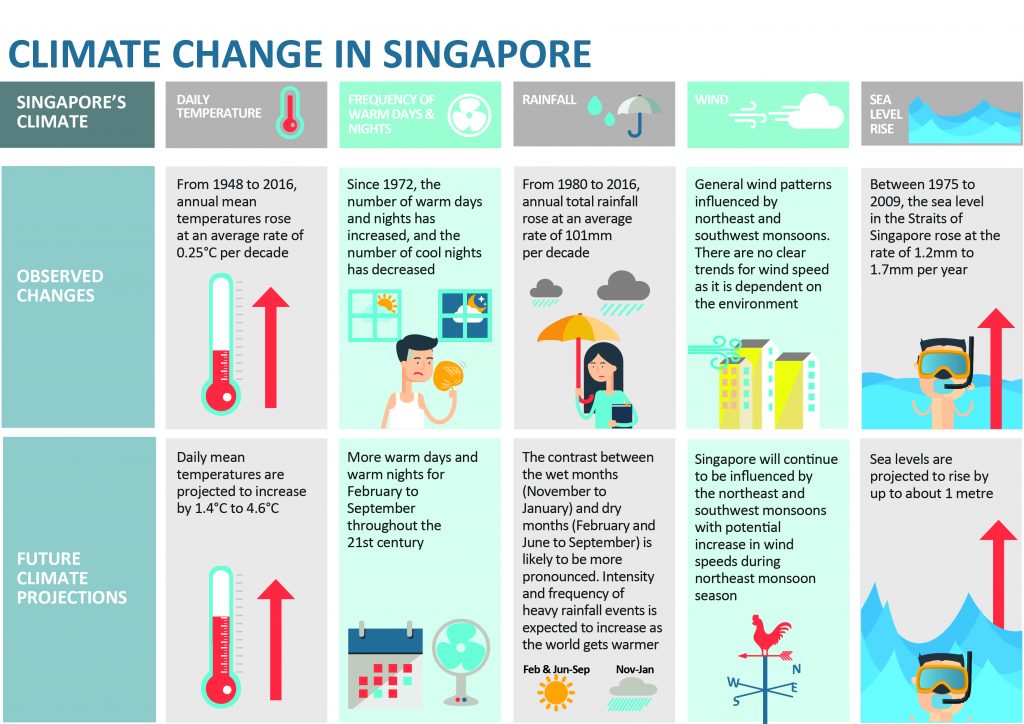 (Source: Ministry of Sustainability and the Environment)

Not only do rising temperatures make it uncomfortable for us to perform our daily tasks, but can also lead to serious health complications.

Our fellow Singaporeans often complain about the unbearable heat, myself included. However, rising temperatures are a real concern for the lives of many Singaporeans, especially for those who spend long hours working outdoors at high temperatures (of up to 36 deg C). The result is that many of them can face tremendous stress on their health, increasing the risk of heat exhaustion and heat stroke.

The problem of heat is likely to get worse. If carbon emissions continue at its current trajectory, maximum daily temperatures are set to reach 35-37 deg C.

What makes this particularly dangerous is Singapore’s high humidity, as the combination of high heat and humidity can cause greater risk of heat injuries due to higher heat stress levels that make it difficult for our bodies to cope. This is because perspiration does not evaporate as quickly in high humidity environments, making our bodies work harder to stay cool and therefore increasing our health risks. In serious cases, this can even be lethal.

Given that heat is such an endemic problem, it is no wonder Singapore has an over-dependence on air-conditioners (AC) – a significant contributor to the Urban Heat Island effect in Singapore. This issue is likely to be exacerbated by rising temperatures.

The Urban Heat Island is a phenomenon where urban areas are significantly warmer than other areas due to human activities. With air-conditioning units generating heat in clusters, it warms the surrounding areas and gets fed into nearby AC units, increasing the temperature of heat that gets ejected. This becomes a vicious cycle.

The irony is that as we are cooling ourselves within the comforts of our homes, we contribute greatly in warming the world. 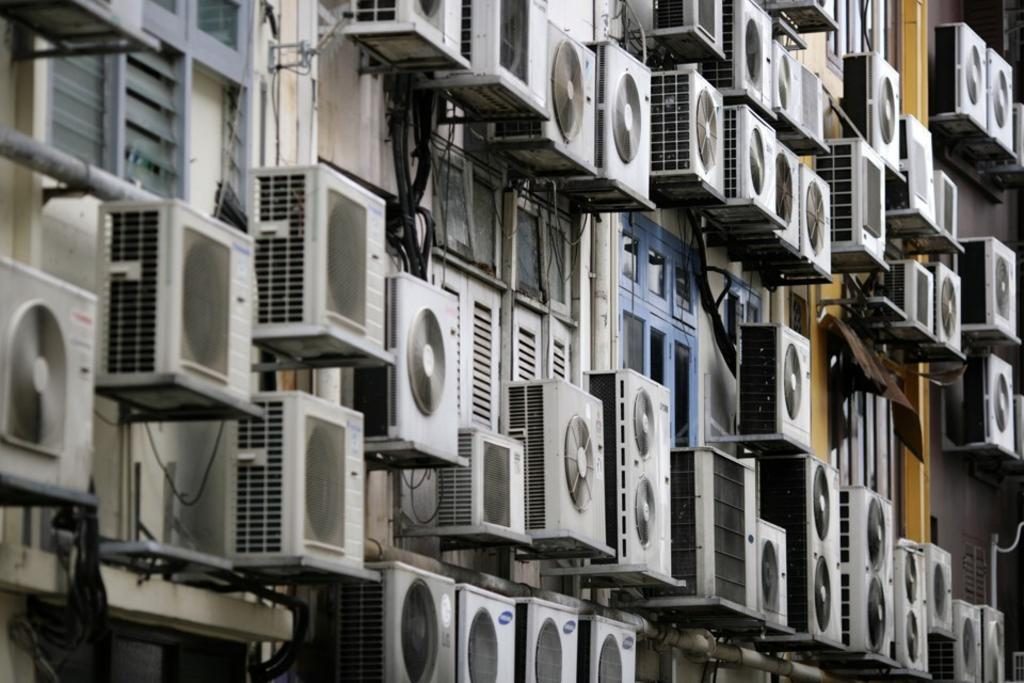 The future for air-conditioning

With regards to our reliance on AC, a new ‘cooling culture’ that uses efficient and clean alternatives needs to be explored. Last week’s article on electricity consumption in Singapore discusses some greener cooling alternatives that individuals can adopt to mitigate the over-use of AC. Businesses can also consider adjusting AC temperatures or using renewable energy to cool their office and commercial buildings.

But it should not stop there. A lot more can be done by individuals, the government and corporations if we want to tackle the larger problem of climate change. Apart from combating our heat problem, other impacts such as rising sea levels, food insecurity, and loss of biodiversity also need to be addressed.

The Singapore government has called upon the nation to treat climate change with “utmost seriousness”, said by PM Lee in the August 2019 National Day Rally speech. Already, the government launched the Climate Action Plan to reduce greenhouse gas emissions intensity by 36% by 2030, and has committed over S$100 billion to climate change strategies.

In order for these plans to come into fruition, it is important not to neglect the vital role of businesses and individuals to take part in making changes now, to mitigate the risks of climate change rather than adapt to it later on.