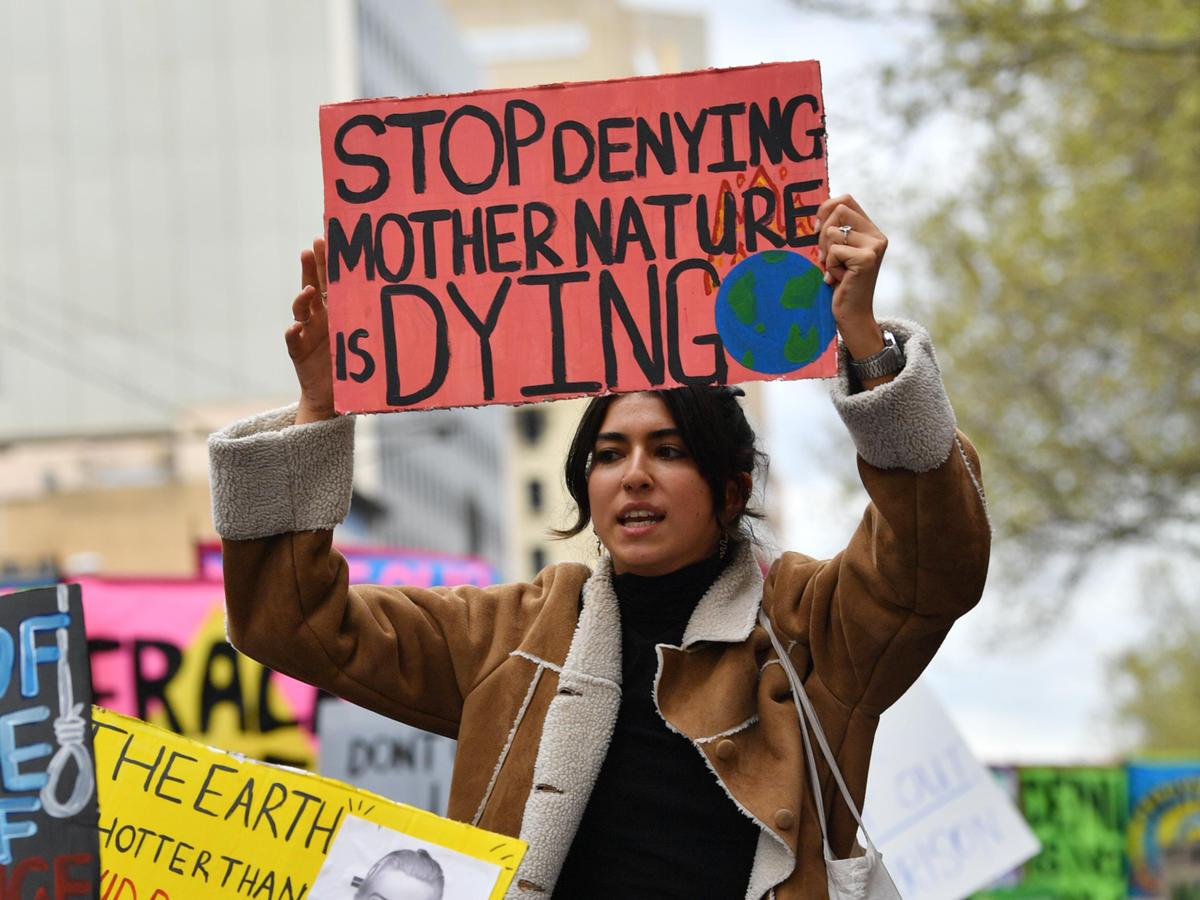 The term “fake news” has been a controversial topic, seemingly taking on a life of its own in recent years. Fake news can be broadly understood as any form of false or misleading information, deliberately fabricated to misinform or deceive readers by influencing their views, pushing an agenda, or causing confusion. Conventionally, we obtain our news from trusted sources, whereby journalists and media outlets are required to follow stringent codes and regulations, so as to preserve editorial integrity. However, with the birth of the internet and social media platforms, a whole new way of publishing, sharing, and consuming information has jointly emerged, which seemingly adheres to little (or no) regulation or editorial standards. Furthermore, the rise of fake news has also unveiled the underlying ‘biases’ of mainstream media outlets, whereby news reports are narrated around their own political agenda, skewing away from objective facts.

Although fake news is often associated with politics, it also exists in the case of climate change. Fake news on climate change seems rather puzzling; For over a decade, the scientific community has largely shared a common consensus on the existence of climate change. In the latest IPCC report, scientists have even declared, definitely and unanimously, that climate change is caused by people:

“It is unequivocal that human influence has warmed the atmosphere, ocean, and land,” 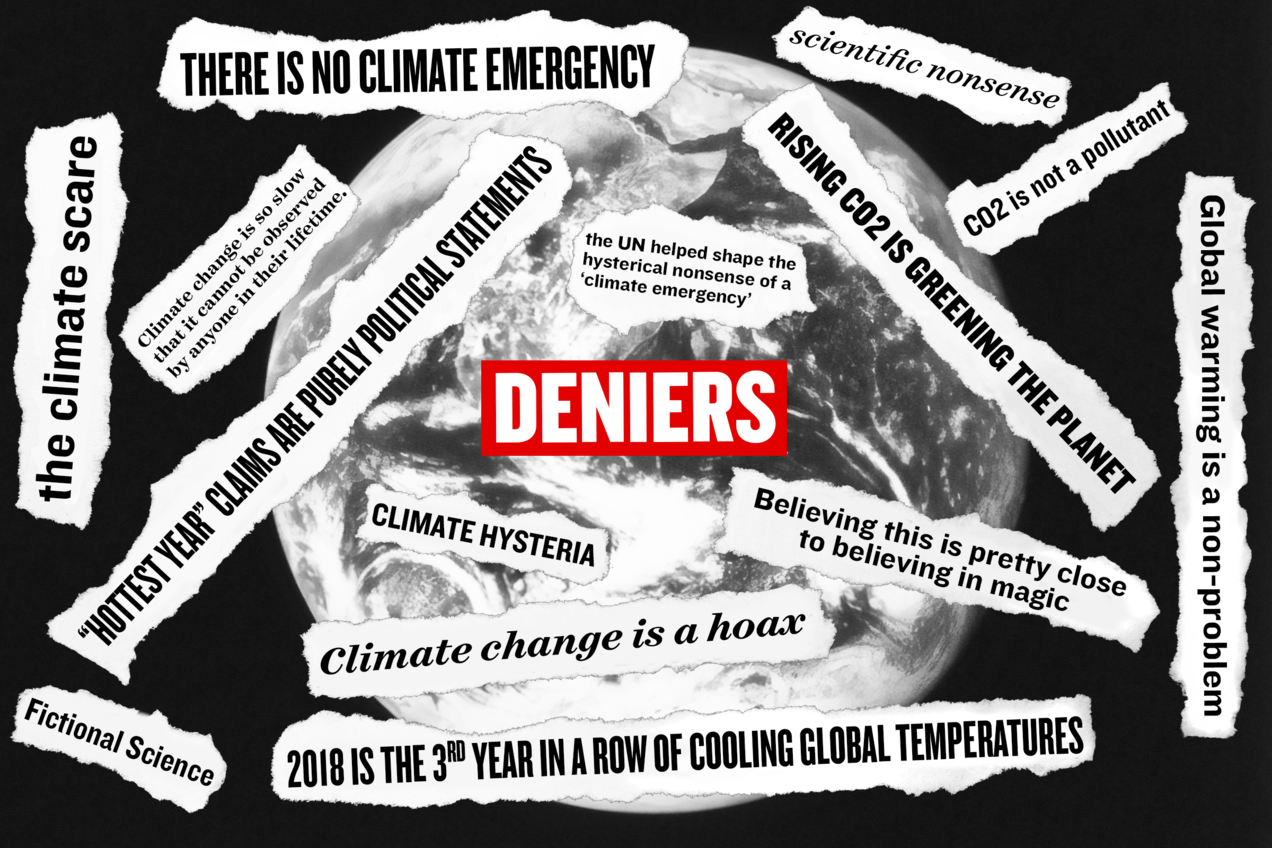 According to Professor Mike Rogerson, a senior lecturer at the University of Hull, many climate change detractors still believe that there is no scientific consensus on the issue of climate change and that climate change is merely a part of the large natural cycle. Furthermore, they remain sceptical of the climate models employed by scientists, with some even going as far as to claim that the data presented are manipulated by scientists. However, Professor Mike Rogerson highlighted that this is largely due to the majority of the general public obtaining their information on climate change from the mainstream media outlets, instead of credible scientific papers. And often, in an attempt to be ‘impartial’, mainstream media outlets would downplay and undermine scientific efforts by pitting them against opinions from climate change detractors. This in turn gives off the false impression that the scientific community is divided on the issue of climate change, and promotes the polarisation of views on climate change.

Furthermore, mainstream media outlets often fail to mention climate change when reporting extreme weather events and disasters, as Bloomberg News reporter Akshat Rathi observed. Thus, when climate change is excluded from the picture, the masses are left unaware of the driving forces behind the reported abnormal weather phenomena. Even when climate change is discussed, Rathi noted that it does not always accurately reflect the best-known science. As climate scientist Ed Hawkins tweeted;

“The science has moved on and it would be great to see that reflected in the news coverage of extreme weather events, rather than the current inaccurate stock phrase,”

On the social media front, the proliferation of false information on climate change has made it difficult to distinguish facts from fiction, expressed Owen Gaffney, an author from the Stockholm Resilience Centre. This constrains world leaders from garnering long-term public support when promoting climate-informed decisions. Furthermore, social media acts as a crucial vehicle of polarisation; the algorithms running the social media platforms encourage the creation of echo chambers, as it reinforces existing false information that climate detractors are already believing in. This makes it harder for them to be exposed to alternative opinions that could change their perspectives. 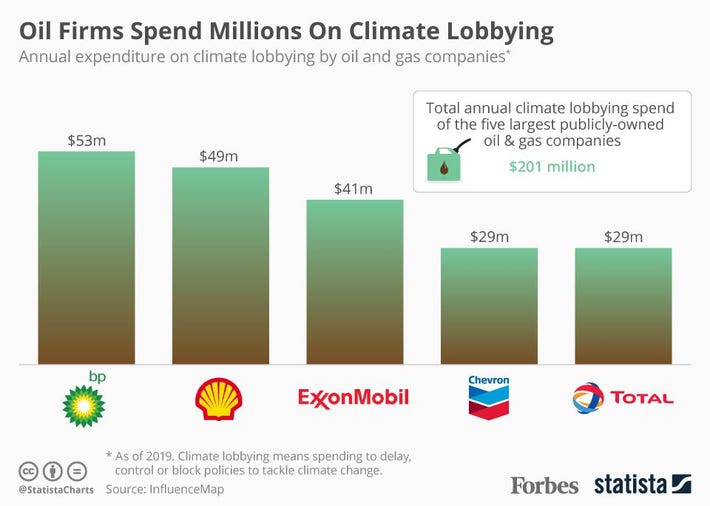 Mainstream media outlets and social media platforms are not the only culprits promoting fake news on climate change. A 2019 report from InfluenceMap illuminated how the world’s five largest publicly owned oil and gas companies spent nearly $200 million on lobbying, in order to block the implementation of environmental policies. Niall McCarthy, a Forbes Data journalist, observed that oil companies often spent millions of dollars on branding activities in order to portray themselves as low carbon companies that understand the impacts of climate change. But such tactics are tasked to blindsight and distract the public from the reality that the oil industry continues to expand its oil and gas extraction activities. One might wonder, how are they still able to garner political support in their lobbying efforts if there is already a scientific consensus on climate change?

According to a news investigation that was carried out in 2015, it was revealed that oil companies such as ExxonMobil are aware of climate change. Furthermore, they are aware of its impacts even as early as 1977, which was 11 years before climate change became a widely known issue. However, this knowledge did not stop them from minimizing oil extraction. Rather, ExxonMobil spent millions of dollars on think tanks in order to promote misinformation on climate change. According to Kert Davies, former research director at Greenpeace, these hired academics are tasked to “emphasize the uncertainty in scientific conclusions regarding the potential enhanced greenhouse effect” from oil extraction. Exxon even went as far as to pay climate sceptic researchers to take part in debates on television, in order to discredit the science behind climate change, motivating the polarisation of public opinions towards climate change.

How do we combat Fake News? 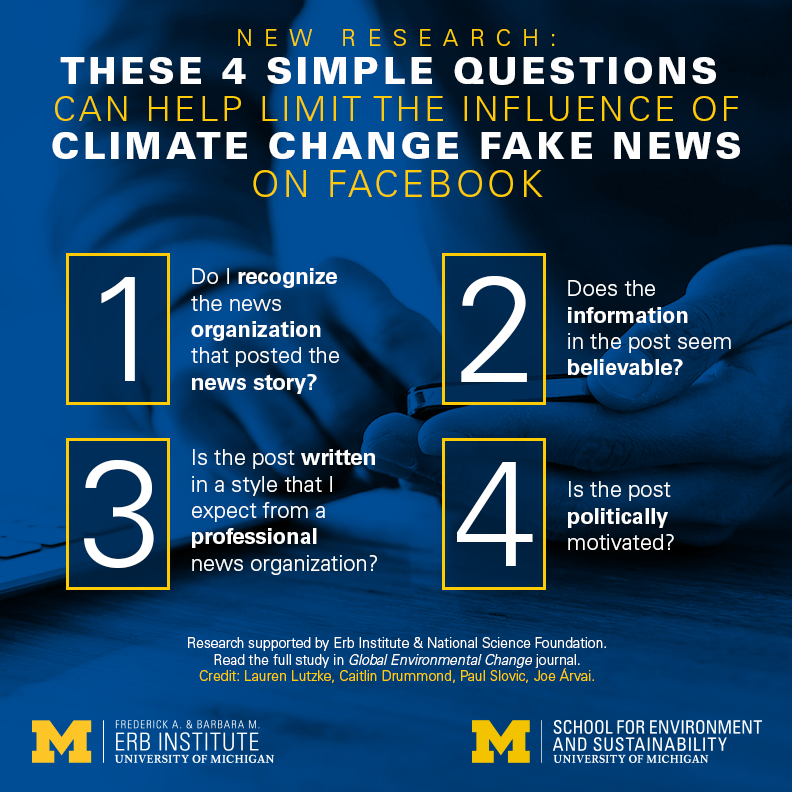 Source: School for Environment and Sustainability, University of Michigan

Although fake news and misinformation on climate change are constantly evolving, the countermeasures against fake news are also ramping up their efforts. Social media platforms, such as Twitter and Facebook, have implemented labels to flag possible misinformation, following the 2020 US Presidential Elections and the COVID-19 pandemic. However, critics have highlighted that Facebook’s alteration of its fact-checking policies, which exempts opinions and satire from fact-checking, has, in turn, created a potential loophole for misinformation on climate change to spread under the radar. In response, Facebook has recently unveiled a pilot project that will aim to debunk common climate change myths.

On an individual level, we could strive to follow certain guidelines that will better equip us to recognize false information on climate change. Lauren Lutzke, a doctoral student at the University of Michigan School for Environment and Sustainability, found that positing simple guidelines would help to spark critical thinking in viewers, in turn assisting them to better evaluate information, in order to stop the spread of fake news on climate change. Viewers that are exposed to the guidelines were less likely to trust, like, and share fake news about climate change on Facebook. Such guidelines include:

Even though it is apparent that the public is much more climate-informed in recent years, we should not take this for granted. Instead, we should step up beyond merely recognizing fake news on climate change. It is also equally important for us to play our part in calling out misinformation on climate change should we encounter them. Although our individual actions might seem rather insignificant, such observational correction, when adopted by all, would make a significant difference.

All I Want for Christmas