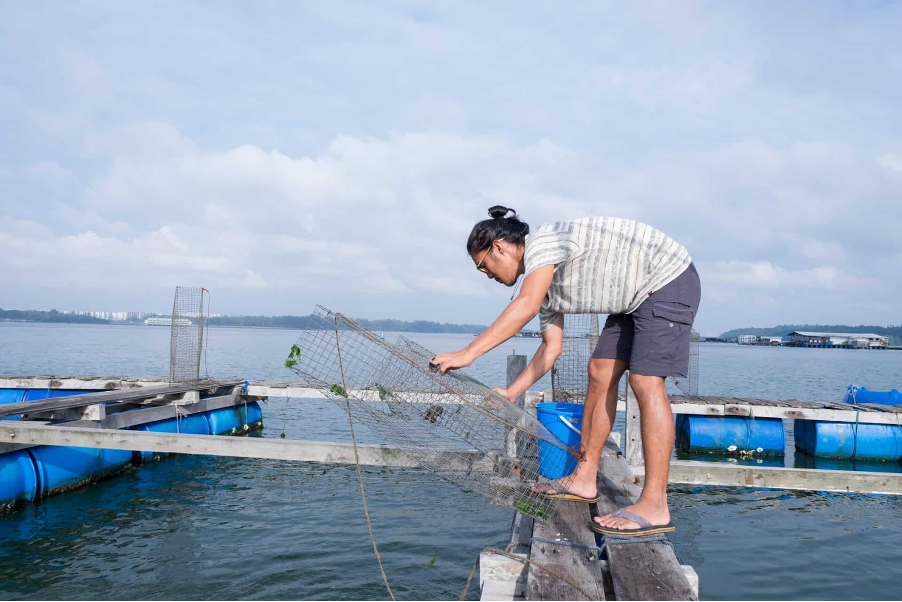 This is an original article written by Frederick Lim

Commercial Fishing and its Environmental Consequences

It is common knowledge that Singapore’s demand for seafood increases steadily with our growing population, and that our fish and seafood supplies are mostly reliant on imports. According to the 2020 Annual Seafood Supply And Wholesale Report published by Statistics Singapore, 128,508 tonnes of seafood had been imported into Singapore in 2020 alone. Compared to the 116,863 tonnes of seafood imported back in 2016, there has been an increase of nearly 12,000 tonnes in the mere span of 4 years. Furthermore, nearly 95% of our fish and seafood supplies come from commercial fishing in the “Coral Triangle”. This encompasses the tropical marine waters of neighbouring countries such as Indonesia, Malaysia and the Philippines. Even with COVID-19 disrupting the global supply chain, these numbers are expected to increase considerably, at least up till the middle of the century.

However, it is also no secret that harvesting fishes on an unsustainably colossal scale would exacerbate negative environmental impacts. According to the World Wide Fund for Nature’s (WWF) Singapore Seafood Guide, 75% of the seafood consumed in Singapore are not caught sustainably. Other than depleting our fish stocks, habitat damage is another environmental impact caused by commercial fishing. Practices like Seafloor Trawling, where fishing equipment are dragged across the seafloor to harvest bottom dwelling species, could in turn destroy seafloor habitats. Beyond the direct impacts on biodiversity and physical damage to the seafloor integrity, the long-term ramifications are also drastic and far-reaching. Destruction of important bottom feeders such as sponges and corals could disrupt the biogeochemical cycle, which would lead to coastal water eutrophication that catalyzes Harmful Algal Blooms, ultimately leading to a mass die-off of aquatic species. 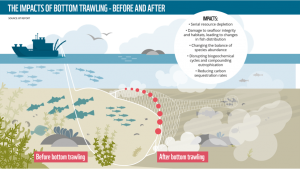 Source: WWF Report: A sea under pressure: Bottom trawling impacts in the Baltic

Such realities would ultimately jeopardise our march towards fulfilling the 14th United Nations’ Sustainable Development Goal (SDG 14) — conserving and sustainably using the oceans, seas and marine resources for sustainable development. We might even risk a total collapse of fish stocks in Asia Pacific by 2048 should current commercial fishing practices be left unchecked. 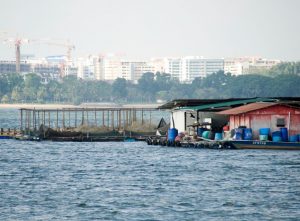 In order to mitigate our reliance on commercial seafood imports, we have turned to local food fish farms, which are currently accountable for producing approximately 10% of Singapore’s seafood consumption. Among them, coastal fish farms are responsible for approximately 85% of the local seafood production, with 110 licensed sea-based farms operating as of 2020. They can be found along the East Johor Straits, located in waters off Seletar, Pasir Ris, and Changi, as well as the Southern waters. Coastal fish farms culture marine food fish species such as Asian Seabass Lates calcarifer, Red Snapper Lutjanus erythropterus, and Short-fin Pompano Trachinotus blochii. Crustaceans and molluscs such as Spiny Lobsters Palinurus polyphagus, Shrimps Litopenaeus vannamei, Mud Crabs Scylla serrata and Green Mussels Perna viridis are also cultured.

These numbers are expected to increase drastically, with the Singapore Food Agency (SFA) announcing the ambitious “30 by 30” vision — increasing our local food production to meet 30% of Singapore’s nutritional needs by the year 2030. As a part of the greater Singapore Green Plan 2030, this target was introduced in a move to promote a more resilient food future, so as to better protect Singapore from volatilities in the global food market. The volatilities could be caused by transport route disruptions, export bans, and impacts of climate change, which could then easily threaten Singapore’s food security.

However, traditional coastal aquaculture does face it’s fair share of environmental challenges. Firstly, irresponsible disposal of farming equipment could pollute the surrounding waters. Farmed species could also introduce parasites and diseases to wild fish/ marine populations, which would easily decimate the local marine life. There is also a possibility of non-native species escaping captivity and out-competing the native marine species. These scenarios would in turn destabilise the local marine ecosystem.

The most prominent impact of coastal aquaculture would be it’s contribution to the formation of “Red Tide”, or Harmful Algal Blooms (HABs). Coastal fish farms stock massive amounts of fishes in open net cages, which leads to a high concentration of waste matter, as well as uneaten commercial feed being released into the surrounding marine ecosystem. These excess nutrients and waste would then accumulate and cause the proliferation of HABs, depriving the waters of oxygen and ultimately leading to a mass annihilation of both farmed and wild species, causing tremendous environmental and economical losses. 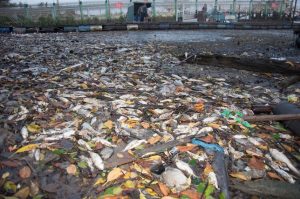 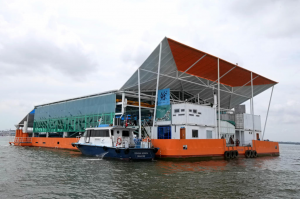 With the Aquaculture industry playing a crucial role in contributing to Singapore’s food security, climate-resilient and sustainable solutions have to be leveraged in order to sustainably fulfil the “30 by 30” vision. One such example is the EcoArk, which is a floating closed containment farm that is purposefully developed by the Aquaculture Centre of Excellence (ACE). Situated off the coast of Changi, the facility was commissioned in November 2019, making it one of the only 3 closed-containment coastal fish farms that is currently operational in Singapore. The EcoArk integrates solar panels to optimise the facilities’ energy consumption, and incorporates automated filtration systems to constantly maintain the water quality. The closed-containment system also prevents any unfiltered discharge of nutrients and wastes into the open waters, while simultaneously protecting the farmed species from external adverse environmental conditions.

Moving onto land, another instance of technological innovation is the multi-tier vertical farming facility that is currently in development by Apollo Aquaculture Group (AAG). As a tiny city-state, this endeavour would greatly mitigate our limited space resources, in turn maximising our land productivity. Slated to be fully operational come 2023, the facility will be eight storeys high, making it one of the world’s largest vertical fish farms. It utilises a fully automated Recirculating Aquaculture System (RAS), also known as the ‘AquaDeck’ technology, to culture a variety of farmed species, such as Shrimps Litopenaeus vannamei, Coral Trout Plectropomus leopardus, and Hybrid Groupers E. fuscoguttatus x E. lanceolatus. 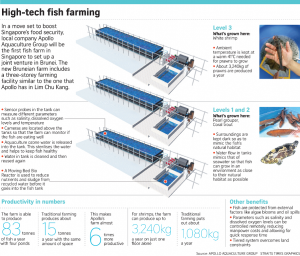 According to AAG, the ‘AquaDeck’ RAS system is said to produce up to 150kg of grouper per tonne of water, making it nearly twice as productive when compared to conventional coastal cage farming. The RAS system also boasts a fully automated monitoring system, which allows for environmental factors such as temperature and salinity to be regulated round the clock. Additionally, waste discharges will also be utilised for culturing aquatic plants, promoting a circular model of production. 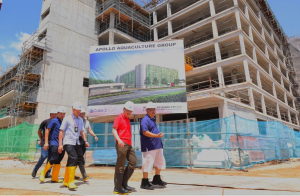 To encourage a robust R&D ecosystem, research institutes and Institutes of Higher Learning (IHLs) have also stepped forth to establish aquaculture R&D facilities to provide more opportunities for sustainable innovations in improving aquaculture productivity. Such facilities include the SFA’s Marine Aquaculture Centre (MAC), which is located on St John’s Island. The MAC provides technical expertise in areas such as aquaculture genetics, nutrition and health to local fish farms, as well as sharing facilities and resources for researchers to study sustainable farming practices and technology.

Another example is the Aquaculture Innovation Centre (AIC), which is situated in Temasek Polytechnic’s Centre for Aquaculture and Veterinary Science facility. The AIC is Singapore’s first Centre of Innovation that is supported by Enterprise Singapore, which comprises a consortium of 11 different agencies (SFA and A*STAR), IHLs, and research institutes. It aims to adopt an inclusive approach where members of the consortium collaborate to serve and train local Small Medium Enterprises (SMEs) in the aquaculture sector towards sustainable development and growth.

Singapore’s aquaculture industry is still an emerging field. However, it has shown great potential to grow exponentially in the decades to come. Beyond embracing R&D innovations and encouraging a collaborative ecosystem between industry players, IHLs such as Temasek Polytechnic are also responsible for providing a seedbed to nurture and cultivate the future generation of aquaculturists. Only then, could Singapore close in on our “30 by 30” vision, ensuring a greater seafood security and sustainability for years to come. 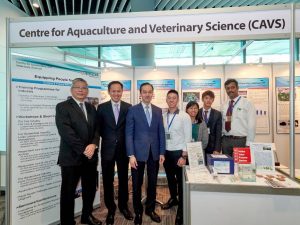