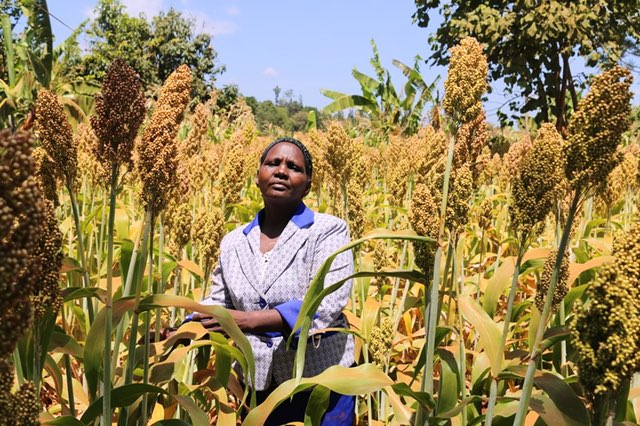 THARAKA NITHI, KENYA – On a recent Thursday morning in Tunyai village, Tharaka Nithi County, about 110 miles (180km) east of Nairobi, a group of women farmers sat under a tree, notebooks and pens in hands, listening to an instructor discussing soil conservation and contract farming.

The Muchore Mutethia self-help group, whose name loosely translates as “a friend that helps,” started in 2004, farming green grams (mung beans), millet, sorghum and pigeon peas. They used to struggle to keep up their crop yields through cycles of drought and often lost much of their profit to middlemen.

But since 2015, the women of Muchore Mutethia have found a way to beat the effects of climate change and get a guaranteed income. They now farm mainly sorghum and sell it to only one buyer: East African Breweries Limited (EABL), the largest malt beer manufacturer in the region.

Sorghum is a staple crop for many low-income households in Kenya, and a raw material in the food, animal feed and brewing sectors. Selling to EABL used to be a reliable source of income for many farmers, until September 2013, when the government introduced a high excise duty on beer made from sorghum, millet or cassava. Production went down, as did demand, leaving sorghum farmers with little choice but to sell to brokers at much lower prices.

The excise duty was repealed two years later, and EABL again started working with contract farmers. But the company required 500 metric tons of sorghum every year, which locked out smaller farmers. 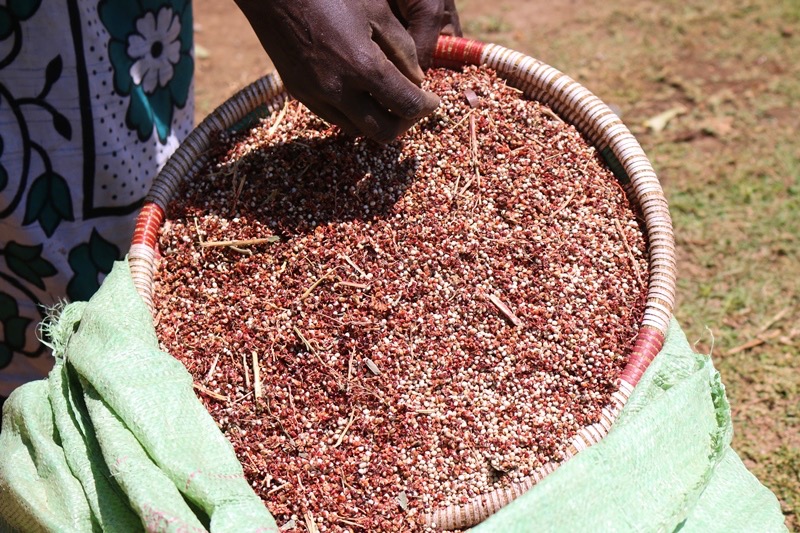 Sorghum is a staple crop for many low-income households in Kenya and is used to make animal feed and beer. (Sophie Mbugua)

Then, in 2015, the United Nations Food and Agriculture Organization (FAO) came to Tharaka Nithi County to conduct a mentorship program in agribusiness, funded by the European Union. Among other lessons, farmers were taught how to improve the acreage they allocated to sorghum production and how to get the best deals through contract farming. Ten farming groups, including the women of Muchore Mutethia, decided to join together to form Tegemeo Cereal Enterprise Limited, an umbrella group that was big enough to meet EABL’s sorghum requirements. Using the negotiating skills they had learned during the FAO sessions, Tegemeo signed a contract directly with the brewery, cutting out the brokers.

“We joined together to achieve the [required] tonnage, with each group delivering its own capacity to Tegemeo, which collects from all the groups and delivers to EABL,” says Martha Nturi, 40, chairwoman of the Muchore Mutethia group. “This gives us a chance to understand when the market dynamics change.”

But before the women could seal a deal with the brewing company, they had to get the men of the village to agree. Women account for 60–80 percent of smallholder farmers, according to Farming First, the global coalition for sustainable agricultural development. But few women farmers have rights to the land they farm, meaning men make most of the decisions on what to grow.

“It was a challenge as men own and subdivide the land,” says Nturi. “Men prefer planting green grams as it’s easier to thresh compared to sorghum.” And the men were not comfortable with the idea of contract farming, which takes away the choice of where to sell your produce and at what price.

“Having the group overcome the fear of contracting, especially with a tradition of exchanging cash and commodity, has been a journey.”

The men were eventually convinced when they realized that contracting to EABL would be better for their farms. The umbrella group Tegemeo would buy fertilizer, pesticides and high-yielding seeds in bulk, then supply the farming groups with whatever they needed at the start of the season. The farmers would pay back Tegemeo with the profits they made selling to EABL. “That was a strategy good enough to win over many men,” Nturi says.

With an assured market, the Muchore Mutethia group encouraged each member to dedicate at least 2 acres (0.8 hectares) of land to sorghum production. It has agreed to deliver 25 tons of sorghum to EABL per year, for a guaranteed price of 28 Kenyan shillings ($0.27) per kilogram. Each member is designated a specific amount they have to produce, based on how many acres they’re farming. If they sell outside of the group, members face a fine of 500 Kenyan shillings ($5) and expulsion.

With farmers devoting more land to sorghum, which is drought resistant, and getting a more regular, guaranteed income, the county as a whole is benefiting from increases in food security and household income. 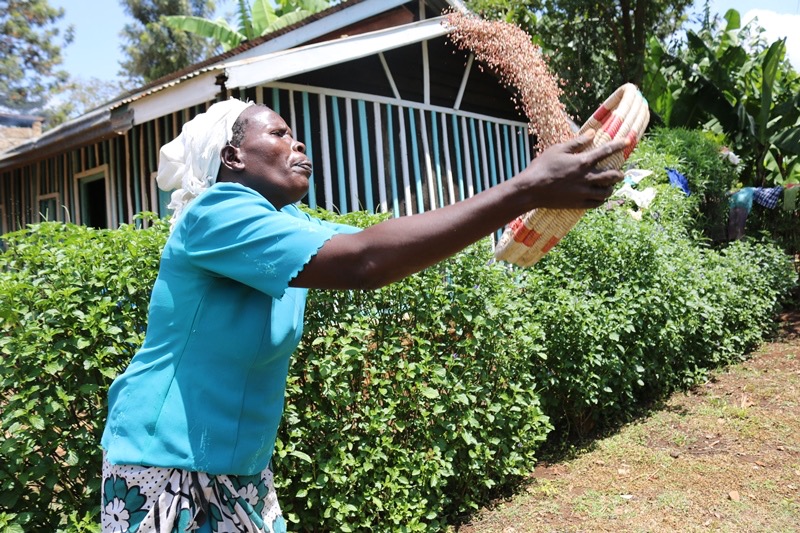 “Contract farming has improved economies and nutrition at the household level,” says Ambrose Ng’etich, the FAO Tharaka Nithi County program officer, who adds that more than 3,500 farmers in the area have directly benefited from contract farming. “Farmers are not only able to meet basic needs like school fees, provide food and improve standards of living, but can also pay taxes to their county governments, hence increasing revenue collection to the county.”

Nturi smiles when she mentions that the level of school dropout in her village is decreasing as more parents can afford school fees. Even alcohol consumption, which used to be high among the village men, is dropping, she says.

“Having the group overcome the fear of contracting, especially with a tradition of exchanging cash and commodity, has been a journey,” Nturi says. “But we have learned that food security is about having money in your pocket and having the power to purchase food for your family whenever you need it.”