Smart buildings: how AI is slashing heating and cooling bills 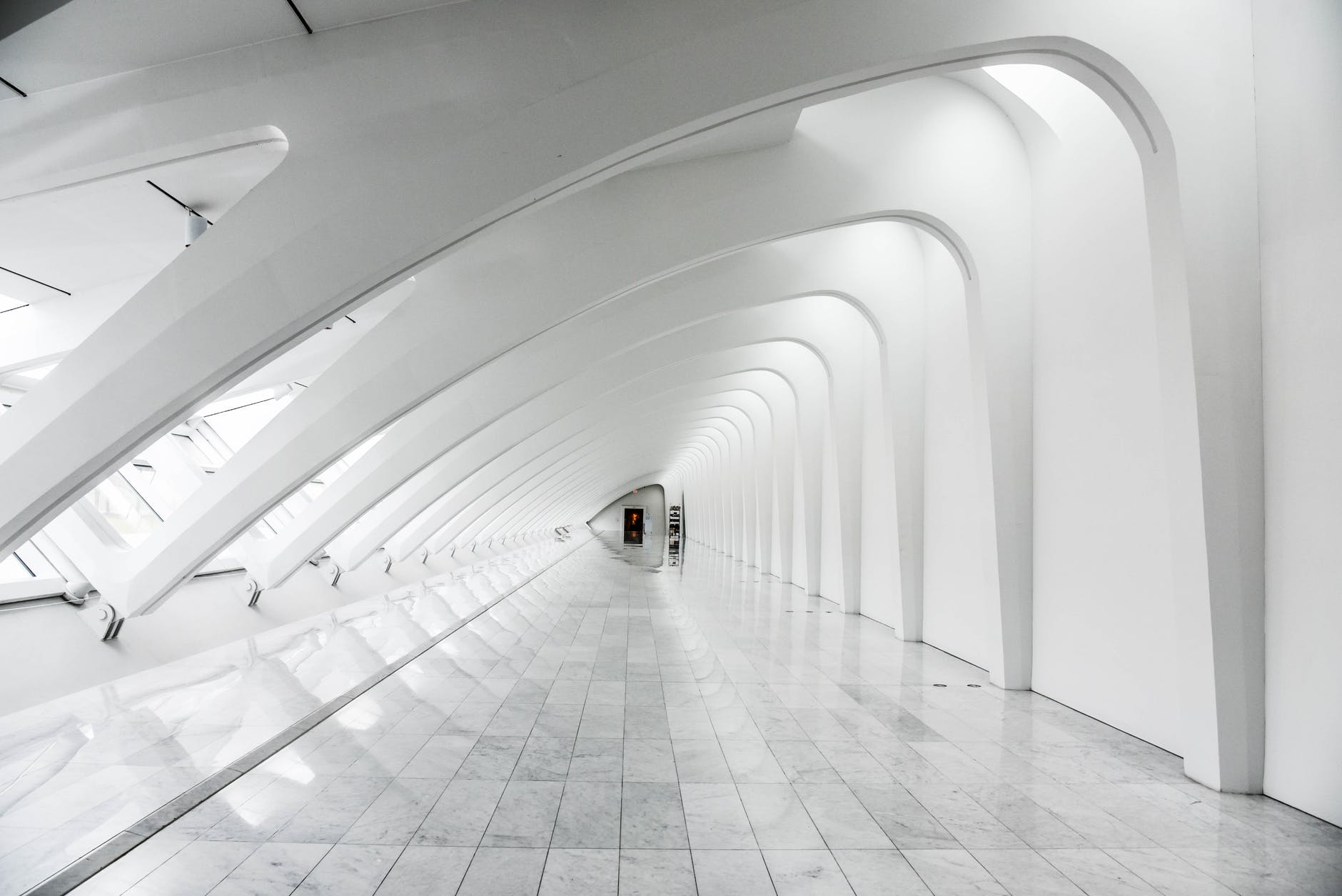 In the nerdy world of smart thermometers, every self-respecting tech geek knows precisely how easy it is to undermine the intelligence wired into these devices: Just press the manual override.

For several years, the so-called HVAC industry – heating, ventilation, air-conditioning – has been turning out increasingly sophisticated programmable thermostats with a range of features designed to allow users to adjust a home’s temperature automatically (including smartphone apps that let users make changes remotely). However, the promised energy reductions and related savings associated with the set-and-forget features go right up the chimney when an occupant decides the dwelling is too hot, too cold or too stuffy, and intervenes. Depending on the device, the settings may not revert, paradoxically enabling all the carbon-wasting inefficiencies these devices were meant to prevent.

Yet with the advent of sophisticated cloud computing, artificial intelligence (AI) analytics and internet-connected sensors, some companies in this market, like Toronto-based Ecobee, are creating smart thermostats that continually readjust temperatures based on incoming real-time data from occupancy and humidity sensors, exterior temperature readings and predictions based on historical patterns of user behaviour drawn from tens of thousands of wirelessly connected thermostats.

Last summer, Ecobee added one more element through its new Peak Relief pilot program launched in partnership with several thousand customers. The company’s AI algorithms allow its thermostats to dynamically adjust to the time-of-use energy pricing policies now in place in Ontario, California and Arizona. Fatima Crerar, Ecobee’s director of social impact and sustainability, says the analytics also enable the company’s thermostats to learn how well a given house holds heating or cooling, and to set temperatures accordingly, especially when no one is at home.

Since 2016, Ecobee has adopted a policy of making anonymized user data available to researchers (customers have to opt-in) in order to suss out new insights about energy consumption. “It feels like a values alignment,” Crerar says. “Ecobee wouldn’t be here if we didn’t hang out with scientists.”

In fact, one team of University of Toronto and University of Carleton researchers is using data culled from over 70,000 active Ecobee smart thermostats over three and a half years to search for patterns in a huge tranche of granular operational data, such as run times and set points.

According to doctoral candidate Brent Huchuk, an HVAC expert, the team (which includes engineering profs Scott Sanner and William O’Brien) analysed the data using AI algorithms to understand when and why users tend to hit override. The idea is that this information can give the devices additional predictive chops, for example, by automatically turning up the thermostat just enough on cold days based on observations about when an occupant is most likely to override the controls.

These insights, Huchuk says, allows the technology to “pre-adapt.”

Such applications hint at the role AI and machine learning will soon play in the broader world of low-carbon, smart building design. Climate change experts estimate that buildings generate about 40% of all emissions, and HVAC systems account for up to half of a building’s energy consumption (the rest goes to lighting, other electrical systems, etc.).

There are a growing number of engineering and architectural innovations for mitigating building-related emissions, including passive design (e.g., making use of building orientation, insulation, materials and other sources of ambient heat or cooling), various heat and cooling recovery systems (e.g., heat recovery pumps attached to drains or air vents), and emerging technologies like electrochromic windows (a.k.a, “smart glass”), whose tint automatically adjusts to sunlight intensity to prevent excess solar loading within west-facing condos, for example.

Increasingly, sensors powered by AI and connected to the Internet of Things are becoming crucial tools in this narrative.

The federal government’s 2016 emissions reductions plan in 2017 incorporated a smart buildings strategy. Since it was released, researchers at Natural Resources Canada have begun testing various AI-based projects that draw on the data generated by smart buildings, according to an NRCAN spokesperson. “While the uptake of AI techniques has been somewhat slower in the world of buildings than in other fields, the potential is significant.”

For example, AI applications in highly automated suite-based HVAC systems can draw on historical patterns and other sources of information to model user behaviour, says Kim Pressnail, a University of Toronto civil engineering professor. He cites the case of apartments in new condo towers, which can be notoriously difficult to heat and cool properly due to their large glass windows. 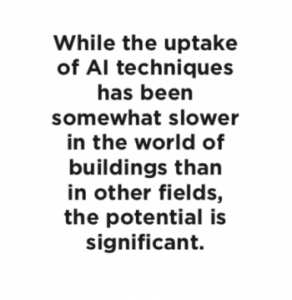 Researchers and design firms, he says, are now working on a two-step process for significantly improving the thermal controls in these apartments. “It’s not glitzy but it makes a huge difference in how buildings perform.”

The first step, he says, is to create air-tight units so the internal heating and cooling systems within each apartment can be regulated properly, including with fresh air ventilation. Then, with occupancy sensors that allow smart thermostats to learn how the residents come and go, these AI-based systems can be “trained” to come on and shut down automatically, with significant potential energy savings. “It sounds simple, and it is,” he says. The payoff, Pressnail adds, isn’t just about reduced energy bills and emission reductions; the units and potentially entire buildings become less expensive to operate and more comfortable to be in. “An AI building will be worth more in the marketplace.”

In fact, proof of Pressnail’s prediction is already visible in other corners of the real estate world. Universal mCloud (MCLD: TSX Venture), a publicly traded Vancouver clean tech firm, has developed cloud-based AI systems designed to improve the energy efficiency of commercial buildings like fast-food restaurants, bank branches and other retail stores, including those operated in Canada by Telus. Unlike commercial office towers, observes Dave Weinerth, president of mCloud’s smart buildings division, many of these structures are operated by landlords who aren’t especially sophisticated about their energy consumption.

In the past few years, mCloud has installed WiFi-connected thermostats and sensors in these modest structures, with the operational data constantly being uploaded to a cloud-based system. There, AI algorithms will optimize temperatures and set points by constantly comparing against historical performance while factoring in exterior temperatures, occupancy levels, and so on. The combination of the wireless sensors and the AI analytics can also alert landlords when the performance of their HVAC systems, which are generally situated on the roofs of such buildings, are beginning to flag and require preventative maintenance.

The savings aren’t trivial: For a modest 3,500 square foot fast-food restaurant that spends $20,000 on its HVAC-related energy expenditures per year, mCloud claims its optimization technology can slash that figure by 15-20%, which represents both a financial savings and a move towards a zero-footprint building.

Aggregate the savings from the thousands of small commercial buildings lining North America’s suburban arterials, and the scale of the emission reductions related to just this one AI application becomes apparent.

“We’ve got to do better with buildings because of climate change,” says Pressnail. “The jury [on this issue] isn’t out. It’s returned its verdict.”

John Lorinc is a Toronto-based journalist and author specializing in urban issues, business, and culture.