In 2018, Anova joined USAID Oceans’ network of partners to establish full-chain traceability for tuna products harvested in the Asia-Pacific region that are consumed around the globe.

The benefits of seafood traceability have been touted over recent years as consumer demand for traceable, responsible seafood has increased and technology advancements continue to emerge. Many businesses, however, are still hesitant to make the leap into investing in traceability, uncertain of the costs to implement traceability and the returns they will see. While long established as a positive corporate social responsibility (CSR) initiative, members of the seafood industry are beginning to shed the light on the tangible and bottom line benefits of fully traceable seafood that are a CSR, business, and environmental win-win.

Over 2017 and 2018, seafood businesses like  Anova Food, LLC  joined the USAID Oceans and Fisheries Partnership’s (USAID Oceans) network to establish full-chain traceability for tuna products harvested in the Asia-Pacific region. This is done by documenting the seafood’s journey from its point of catch to its point of sale, collecting data from the fishers who are the first to touch the fish to the importers—like Anova—who are the last. USAID Oceans, together with its partner and grantee, Yayasan Masyarakat dan Perikanan Indonesia (MDPI), recruited small- and large-scale industry partners in USAID Oceans’ learning site at Bitung, Indonesia to pilot seafood traceability technology that follows the catch through the seafood supply chain.

Through the program, Anova’s supplier, Blue Ocean Grace International (BOGI), began using TraceTales, a traceability application that allows processors to electronically track their inventory as it moves through the processing factory—from receiving, to filleting, to packaging, freezing and shipping—and provide robust traceability data to their importing partner. TraceTales enabled BOGI to convert their old, one hundred percent paper-based recording system to a fully digital, computer-based system that allows them to electronically capture, store and manage product data. As a result, both businesses have seen impactful changes in their day to day business and bottom line operating expenses. 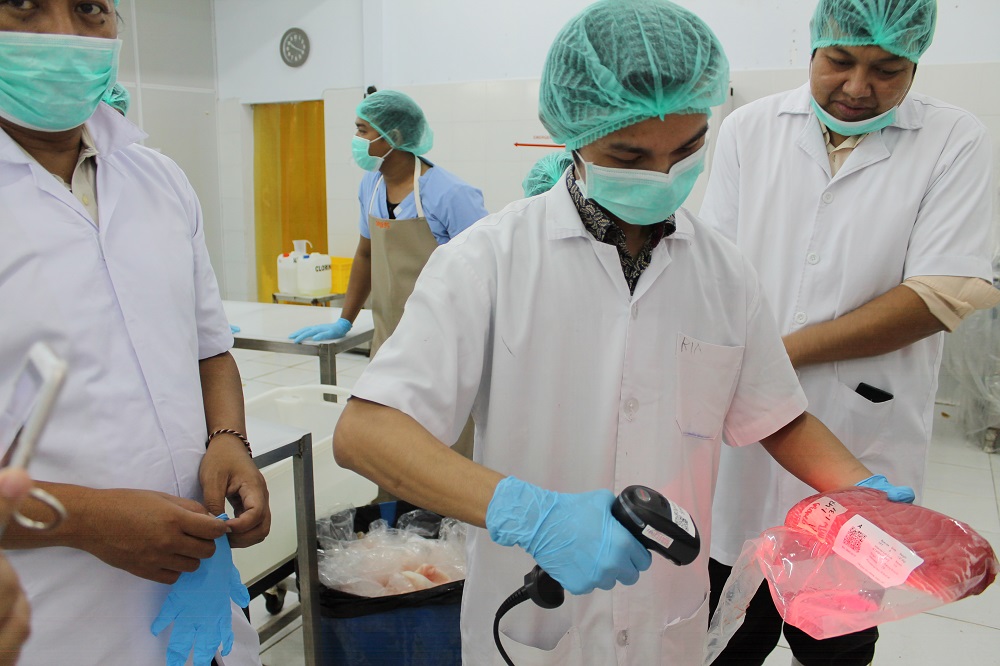 At BOGI, tuna is prepared, packaged, and shipped for export—all while being electronically traced.

“Thanks to the traceability technologies funded and developed by USAID Oceans, we have experienced benefits at both Anova’s and supply chain levels. We are now able to create timely reports that comply with importing regulations, we meet increasing customer demands for product traceability and can create accurate inventory reports that enhance our business,” commented Blane Olson, Managing Director of Anova Technical Services, LLC.

Anova recommends that businesses interested in implementing traceability systems follow a few key planning steps to ensure their success and realize similar business benefits. First, clearly define the scope of traceability system needs by identifying its purposes, relevant stakeholders, information and data to be captured, and required capabilities. Allow for flexibility in the system so it may be customized for use in different processing plants. With this information, start small by conducting pilots at a small scale to assess and evaluate system capabilities. Leverage your networks to build strong relationships and work closely with suppliers, provide trainings to staff and relevant suppliers, and always communicate frequently with customers on current traceability practices and commitments.

USAID Oceans continues to pilot traceability technologies with members of both the public and private sector across the Asia-Pacific region, sharing partner experiences with others interested in making the leap to full-scale traceability. In addition to traceability’s numerous business benefits, the adoption of traceability tools and systems supports marine biodiversity conservation through enhanced fisheries management, as well as the potential to create more fair and equitable supply chains for those that work in them. Learn more at www.seafdec-oceanspartnership.org.

The USAID Oceans and Fisheries Partnership (USAID Oceans) is a five-year, regional program working throughout the Asia-Pacific region to bridge the public and private sectors to develop fully transparent seafood traceability systems that combat illegal, unreported and unregulated (IUU) fishing, promote sustainable fisheries and conserve marine biodiversity. The program has partnered with a range of supply chain actors for fully traceable tuna products that bring benefits to actors in the region, as well as back to markets and consumers in the United States.

Anova is a top, sushi-quality tuna company in North America that leads the industry in the global sourcing of wild caught and sustainably harvested tuna. Annually, Anova imports over 12 million pounds of frozen tuna products to the United States for sale by retailers, including the country’s second largest food service company. Anova sources its seafood from several countries in the Western and Central Pacific Ocean, with 40 percent harvested from the rich waters of Indonesia. Anova has a core commitment to social and environmental responsibility and works to deliver sustainable seafood to ensure a healthy supply of fish for future generations.