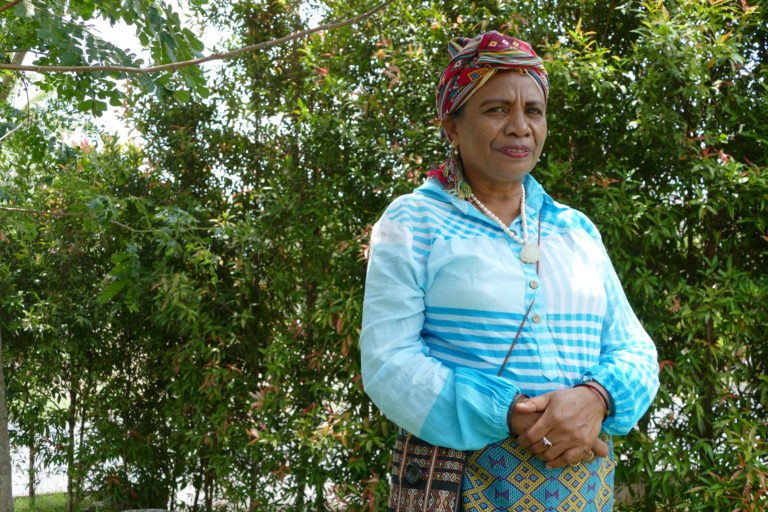 This article was originally published by the Stockholm Environment Institute and is republished with permission.

Aleta Baun, also known as Mama Aleta, is an Indigenous leader with an eye to the future. At the recently concluded “Challenges and Opportunities on Indigenous Knowledge Systems and Practices and Rights-Based Sustainable Development” forum in Yogyakarta, Indonesia, Mama Aleta served as a distinguished presence on Indigenous knowledge and rights. The forum –  held in partnership with the Samdhana Institute as part of the SEI-administered Strategic Collaborative Fund Phase 2 project – resulted in a forward-looking statement on the self-determination of Indigenous Peoples that will be released in November 2019.

Indigenous communities face growing threats from climate change and rapid development, including destructive practices such as extractive activities and unsustainable agriculture, but the contributions Indigenous knowledge and cultures can bring to meet these challenges are often ignored. Mama Aleta opened the forum with salient points on bringing Indigenous voices back into the conversation. She stressed the importance of using traditional knowledge as a first line of defense for addressing climate change and the opportunities for storytelling and community leaders to pass on knowledge about environmental challenges and natural resources.

Mama Aleta won the prestigious Goldman Environmental Prize in 2013 for helping to stop the destruction of sacred forestland on Mutis Mountain in West Timur on Timur Island, Indonesia.

Although Timur is a dry, rocky island prone to drought, Indigenous Peoples have overcome these conditions for generations to grow crops, raise livestock and sustainably harvest the island’s natural resources. In the 1990s, however, mining companies moved in, seeking to exploit the island’s rich marble deposits.

“We started to lose so many things due to the mining,” remembers Mama Aleta. “There was soil erosion and drought. Livestock died due to pollution. Traditional medicine disappeared. The local stone was the tribe’s identity – tribes were named after it and the mountain.”

“I began engaging with the community to stop this loss. I worked with 22 villages, each of which had 400 to 500 people in it. Traditional knowledge helped me communicate with the communities – how the land is used and shared. The mining area was a traditional livestock raising area, and the knowledge from that practice also helped us form a response.”

The communities used this Indigenous knowledge to form strong opposition to the mining. Finally, in 2010, they were successful in getting it stopped. In the aftermath, however, many challenges remained: the mined hills led to continued erosion, water sources were reduced, and 30 percent of the forest was lost. Pasture for livestock herders as well as the land available for agriculture also decreased. “The agricultural calendar has also changed,” concludes Mama Aleta, “the community cannot know the planting calendar anymore, due to climate change.”

The West Timur government has now put some indigenous lands under protection due to their high biodiversity, locking out local people who can no longer access it. “The government has their own mindset, but the community has an opinion as well,” says Mama Aleta. “For the community, the area is sacred, due to its water sources. The forest is the supermarket for Indigenous Peoples.”

Mama Aleta is now leading the rehabilitation of the land through organizing groups for environmental sustainability. “The community remembers the Indigenous knowledge they used to fight against the marble mining,” she recalls, “and are using it to first fulfill their economic needs and ensure food security through guardianship of the land, water, soil and stone.”

Though the mining is long gone, and progress has been made, new challenges – coupled with the increasing unpredictability of rains and soils due to climate change — are on the horizon and continue to mount for the communities of West Timur. Mama Aleta is maintaining her work in these communities, using her closeness to nature and Indigenous knowledge to ensure the island’s inhabitants will thrive for many more generations. She has a simple recommendation to help achieve this prosperity: “keep your know-how in your hands.”