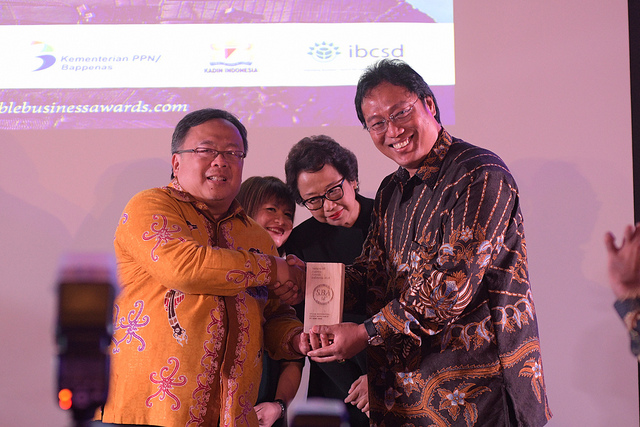 Indonesian steel manufacturer Ispat Indo has emerged as the winner of a new award category on cooling efficiency at the 2018 Sustainable Business Awards Indonesia, highlighting how action on cooling can make a massive contribution to the fight against climate change.

The company won in the Best Cooling Efficiency section of the awards, organized by Global Initiatives. According to the judges, Ispat Indo “has a clear energy policy and identified cooling as a key measure for saving energy.”

The company was recognized for setting clear target to monitor consumption, which drives efficiency, and for continuously upgrading and replacing its cooling systems to create greater efficiency.

Global Initiatives, in partnership with the Kigali Cooling Efficiency Program (K-CEP), developed the new award to recognize the leadership and innovation of companies developing and adopting the most efficient cooling technologies.

Nestle Indonesia and United Tractors also received special recognition in the category. Nestle has an energy efficiency policy that focuses on industrial refrigeration and has implemented numerous initiatives to reduce energy consumption from cooling systems. United Tractors calculates its cooling loads and implements initiatives to reduce energy consumption, such as installing a Variable Refrigerant Flow system and changing the indoor temperature based on building occupancy.

The importance of action on cooling

Cooling, in its current form, is energy intensive, expensive and polluting. With growing economic status and rapid urbanization, the demand for cooling systems, such as air conditioners and refrigerators is rising substantially.

In air conditioning alone, the number of units in use will rise from 1.2 billion to 4.5 billion by 2050, driven by rising incomes and a shift to the Global South. Business as usual will see the sector grow 90% by 2050 over 2017 levels.

This demand could lead to an increase in greenhouse gas emissions from not only the higher electricity consumption, but the hydrofluorocarbons (HFCs) that are used as cooling agents. If these HFCs are not managed, they could account for close to 20% of climate pollution by 2050.

Looking at Indonesia alone, it is estimated that there will be an increase of 15% per year in commercial and private sector usage of cooling systems like air-conditioners and refrigerators. A recent study by Eco-business on “Freezing in the Tropics” found that Indonesian consumers could save nearly US$690 million per year by 2030 by keeping pace on cooling efficiency with Asean neighbors.

The Kigali Amendment to the Montreal Protocol, which on January 1, 2019 started phasing down HFCs, provides a huge opportunity to tackle the issue. If fully ratified by member states, this amendment can deliver almost 0.4°C of avoided warming from addressing these gases alone.

The required refit and redesign of cooling equipment opens up a window to do more. At the 30th Meeting of the Parties to the Montreal Protocol in late 2018, the Montreal Protocol’s science panels found that combining the phase down HFCs with energy efficiency gains could double the climate benefits. K-CEP focuses on the energy efficiency of cooling to increase and accelerate the climate and development benefits of the Kigali Amendment.

UN Environment hosts the Secretariat for the Montreal Protocol, and is deeply engaged in creating more sustainable cooling solutions, through assisting Parties to implement the Kigali Amendment and by maximizing the potential of district energy, which can bring cooling to homes and businesses by using seawater and other sources.
To make the transition to sustainable cooling, it will be critical to build awareness, recognise industry leadership, and encourage more companies to invest in and scale up usage of cooling efficiency technologies.