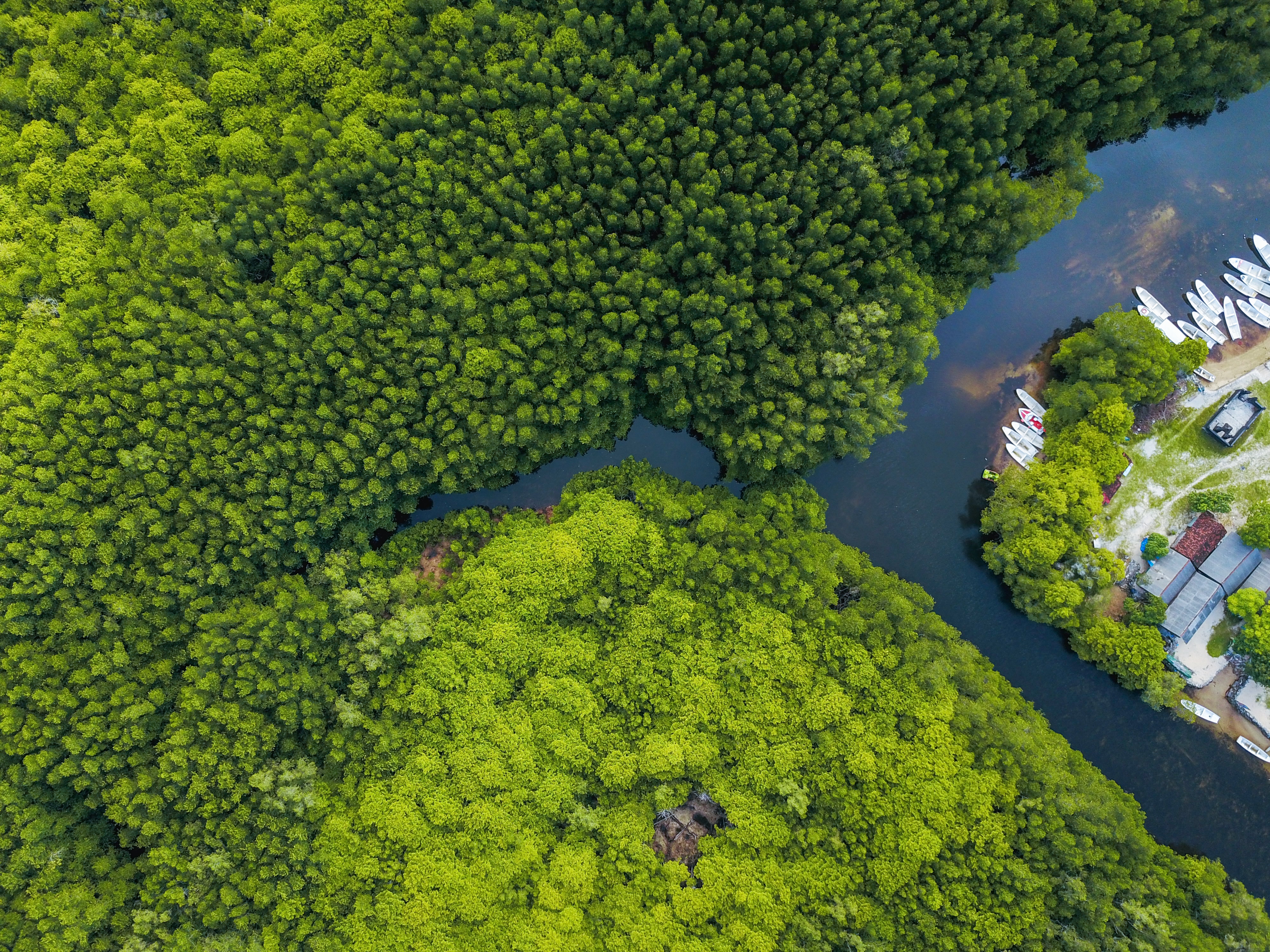 KOGGALA/UNAWATUNA, Sri Lanka — About 140 kilometers (87 miles) south of Colombo, the Sri Lankan capital, lies the coastal town of Koggala, named after a picturesque lake and identified with author Martin Wickremasinghe, who lived there and wrote his famous children’s novel Madol Doowa (The Island of Mangroves) after one of the eight ecologically rich islets that dot the estuary lagoon.

Koggala and neighboring Unawatuna, one of Sri Lanka’s most popular tourist destinations, had for decades experienced significant environmental destruction: from sand extraction to mangrove clearance to reef destruction — all resources on which the local communities were highly dependent.

Then the Boxing Day tsunami of 2004 struck, destroying lives and property on a scale that the Indian Ocean island had never before experienced. The tsunami also left a single powerful lesson behind: those who lived behind the lush vegetation of mangrove swamps were better shielded against the ferocious waves.

As part of the post-tsunami recovery, new mangrove regeneration and conservation efforts were carried out along the more ravaged areas of the southern coast. In Galle district, where Koggala and Unawatuna are located, a multi-stakeholder approach was adopted with public-private partnerships to drive replanting efforts.

Long after the NGOs and the government moved on, however, it’s the local community that’s responsible for the success of the “mangrove green belt” that’s sprouted up along the southern coast today, locals say.

One of these community members is Thilakaratne de Silva, 63, a fisherman who saw the wave sweep half of his home village of Akurala out to the sea on that fateful Dec. 26, 2004. Months later, once the rubble had been cleared away and new initiatives introduced to strengthen coastal natural buffers, he was among the first to engage in the replanting of mangroves.

“I began to respect what nature had endowed on us,” he told Mongabay. “For long, the value of mangrove forests was socioeconomic. Even their beauty was monetized: for cheap tourism. But now we know, it saves lives; it has.”

Half of Sri Lanka’s 1,620-kilometer (1,000-mile) coastline suffered the ravages of the tsunami, and a vast number of mangrove replanting initiatives were focused here. Over the years, the communities have sustained those original efforts — although success on the ground has been sketchy for the most part.

A threat greater than the tsunami

Today, Sri Lanka faces threats of a far more destructive kind: rising seas and extreme weather events as a result of climate change. The island has been identified as among the top five countries that will be impacted by climate risk, and that has spurred a fresh move to expand Sri Lanka’s mangroves. The coastline of Galle in the island’s south is cited as a success story to be replicated as the nation once again seeks to strengthen its natural buffers.

In August, the cabinet approved a proposal to rehabilitate state-owned mangrove lands that have been abandoned after being used for shrimp farming or as salt-drying pools, known as salterns. The plan targets adding 10,000 hectares (24,700 acres) of rehabilitated mangrove swamps to the island’s current mangrove cover of 15,670 hectares (38,700 acres).

“The effort to retake some abandoned land and declaring critical associate regions is part of a policy to increase resilience,” said M.P.D.U.K. Mapa Pathirana, state secretary of the Ministry of Mahaweli Development and Environment. He told Mongabay that the government is keen to strengthen the island’s natural buffers, especially against increasing extreme weather events.

Authorities say a significant factor in the mangrove replanting efforts that have taken root is the implementation of regulations relating to both coastal and forest conservation, effectively curbing coral and sand extraction as well as mangrove clearing. Since a 2009 listing of mangroves as forming a part of forests, there have been strict prohibitions on activities other than traditional fishing and subsistence-level use of mangrove forests.

Sri Lanka, home to 82 lagoons and estuaries, has seven types of interrelated ecosystems: coastal marine zones, beaches, bays, estuaries, lagoons, tidal flats, and dunes. Embedded within these parent ecosystems are a multitude of mangroves, sea grasses, coral reefs, and soft mud bottoms, all of them making the Indian Ocean island’s coastal ecology both rich and diverse.

Anuradha Wickramasinghe, head of the NGO Sudeesa, which runs the world’s first mangrove museum and serves as the local partner of Seacology, a U.S.-based environment conservation organization, said Galle’s success in replanting mangroves comes from consistency and community engagement.

“They need to be community-driven, for which we must incentivize. Women are the best leaders; they influence both children and communities much better,” he said.

Among them is Wathsala Padmini, 39, who said the prevailing top-down restrictions on how communities may use forests didn’t work.

“Officials used to preach that we should not collect any edible plants. Little do they know that we are so poor and cannot afford to buy vegetables every day — or fuelwood. When planned replanting programs were introduced, I joined them, and learned about sustainable access and how to protect my environment,” she said.

Senuli Anosha, 29, showed off an armful of karen koku (Acrostichum aureum), an edible variety of fern used in a local delicacy. It was a precious find from a nearby mangrove swamp for Anosha, the wife of a fisherman: it would be the only curry served for lunch in her modest home made of wattle and daub.

In addition to their vegetation, mangroves also provide a home to a variety of marine life, serving as nurseries for several fish species.

Men from the local communities fish while the women gather fuelwood and edible plants for household consumption and sometimes for sale. The more enterprising women also brew a popular beverage of ripe kirilla fruit (Sonneratia caseolaris), also known as mangrove apple, which they also sell.

Fifteen years after the tsunami, many of the affected regions in Sri Lanka still lack adequate natural buffers. But authorities see some positives changes.

While the results of replanting efforts may be patchy, the communities have begun to adapt. “The gathering of edible mangrove varieties continues, and that is allowed. But cutting down trees and shrubs for fuelwood has given way to the collection of twigs and branches,” said Sarathchandra de Silva, who works with an international agency engaged in a replanting program.

“We are mindful of not cutting mangroves for fuelwood, so we collect them,” said Sugunawathi, 51, a villager. He explained that other types of fuelwood are available but that people prefer mangroves over these or even kerosene or gas, due to their burning efficiency.

The frequency and extent with which communities access mangrove forests has much to do with rural poverty and lack of livelihoods. Small-scale fishing also persists, but as the growing tourism industry employs more rural men, incomes are rising — and with them, an appreciation for the importance of maintaining mangroves.

Gamlath, a forest officer, said that while significant progress is being made in the coastal belt of Galle, the pressing need now isn’t for more planting, but for sustaining the positive conservation efforts that have been made.

“In doing so, we must understand that people have a right to access natural resources for survival,” he said. “But such practices need to be sustainable.”