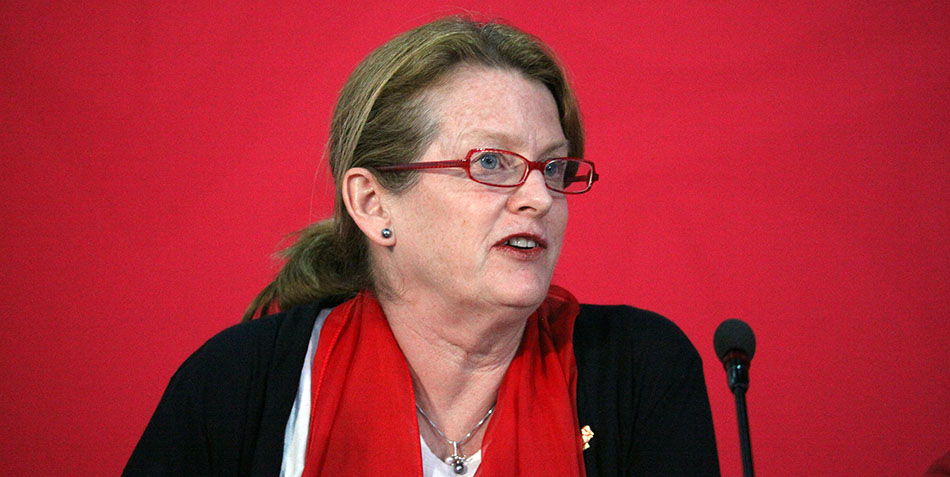 Women play a critical role in accelerating sustainable development. In the United Nation’s Sustainable Development Goals, many targets specifically recognize women’s equality and empowerment as the objective and as part of the solution – in addition to the SDG 5 being dedicated for achieving gender equality and empowering all women and girls.

Gender disparities are especially clear in the food and agriculture sector, where women face persistent obstacles and economic constraints, although they could play a transformative role in agricultural growth in developing countries.

We spoke to Jeannette Gurung, the founder and Executive Director of Women Organizing for Change in Agriculture and Natural Resource Management (WOCAN), a global network to support advocacy and capacity building for women’s leadership and women’s empowerment through partnering women farmers with women professionals and decision makers, and through building men’s support. Jeannette is a forester and gender and development expert whose career has focused on leading organizational change for gender equality within agriculture and natural resource management organizations in Asia and Africa. Jeannette is the innovator and team leader for the W+ Standard ™ program within WOCAN to quantify and verify benefits to women, through the use of a results-based financing approach.

1) What challenges drove you to become an advocate of women’s empowerment and especially focusing on agriculture?

It was personal. As a student of forestry and environmental studies, I realized not only how few women were in those sectors, but how masculine the culture was. As a Peace Corps volunteer in a village in Nepal, I saw first-hand the reliance of families on the hard labor of rural women to provide for energy and food security needs. Later, working as a professional in an international organization addressing environment and agriculture issues, I was frustrated by the lack of attention to gender and the exclusion of women – at all levels- from participating in decisions and accessing resources. I felt this exclusion myself. It was clear that women who were doing most of the agriculture work were almost completely left out of development initiatives that aimed to increase production through access to extension, capital and even governance of collectives. The image of the farmer as male, with his wife as his helper, and the bias within these sectors has led to ineffective programs that direct resources to the wrong beneficiaries!

2) Tell us more about the W+ standard and its approach?

The W+ standard was designed for basically two purposes: 1) to incentivize agriculture and environment related projects to deliver benefits to women, by providing a results-based payment system that certified projects that brought about measurable results in women’s lives and 2) to provide a new revenue stream for women’s organisations, who receive cash contributions from this system, to use as they wish for their community initiatives. The W+ Standard provides a framework to measure, certify and report on outcomes of activities for women’s empowerment at the project level in six domains: time saved, leadership, health, income/assets, education/knowledge and food security. It also provides a label for supply chains that provide benefits to women. There is much more information about this available on the W+ website: www.wplus.org.

3) Can you share a success story on empowering women – or a woman?

I would like to talk about the power of women’s leadership to change communities. We have worked closely with one leader in Nepal, who comes from a marginalized group of poor hill farmers. After participating in our leadership course and being mentored by our team, she realized that, in fact, what came naturally to her to share knowledge and communicate with other women, WAS leadership. She had previously defined leadership as having authoritative control over others, as per the norm in Nepali culture. With this awareness, she developed confidence and honed her skills as a ‘relational leader”, strengthened a women’s group, and approached government officials to demand access to resources for farmers that had been denied to women. This group not only gained resources, but began to dream of larger initiatives they could undertake collectively. At the time of the earthquake, the women’s group under her leadership was able to quickly mobilise resources and help neighboring communities that were without leaders – demonstrating proof of the effectiveness of leadership, particularly in times of chaos and unstability.

4) Who should and could make a difference in achieving gender equality?

Men who are able to influence other men. We live in a world that is still dominated by individuals and cultural ideals that privilege men. Yes, this is changing, which is generating a backlash as well in some societies, but gender inequality is pervasive and persistent. Male supporters of women’s leadership, for example, can bring their power and influence behind women to encourage their voices, to assure they obtain resources, etc. There is much evidence to show that women use their resources for the benefit of families and communities, which should convince men of the gains that can result from gender equality. We must realise that these same forces prevail within institutions, even at the international level, and not assume gender inequality exists only in communities of developing countries.

5) What do you regard being the biggest obstacle on the path towards mode gender-equal world?

At this time, I believe that development agencies, companies and investors supporting gender equality goals need to think and act much more boldly, more innovatively to address this issue. We know the problems, and some solutions, but the financial resources for gender-related programs are still miniscule (only 1-2 % of all international aid budgets). A statistic even more revealing is that only 9 % of these funds goes to women’s organisations, even though they have historically been closest to transforming the position of women and girls in societies. This significant lack of investment in women’s organizations that impedes global goals for sustainable development. Another problem is the lack of accountability systems, since most programs measure and report only on inputs and outputs, not on results. We need bold new thinking and commitments in order to bring about real change, that is not just window dressing.

6) Despite the challenges, what positive changes have you recently noticed in the gender equation?

There is a sense by some that we are now at a tipping point, based on interest of the private sector corporations and investors in women’s empowerment and gender issues. This is because women are coming into positions of power in some influential bodies (banks in Europe, for example), or as wealthy individuals who wish to see their money used for this purpose. The interest of companies to address the Sustainable Development Goals, that include a standalone goal for gender, is a welcome and somewhat surprising positive change. If companies and investors, as well as governments and NGOs, can finally understand and believe that addressing gender goals brings positive results for all sustainable development goals and in fact, is a prerequisite to achieving those goals, then we can hope to see more and more investments in women as agents of this change.